The Bird-While (Made in Michigan Writers) (Paperback) 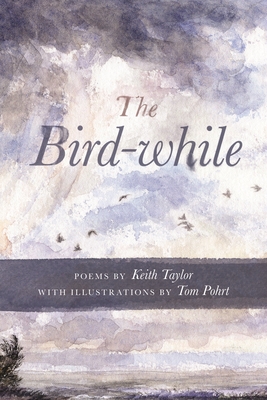 The Bird-While (Made in Michigan Writers) (Paperback)

Though admitting such may be an act of blasphemy, I had yet to read any Keith Taylor poetry until this collection (gasp!). Alas, I now find myself angry at past Bennet. Throughout these poems Keith exposes the reader to a bevy of images, noises, and best of all, revelations. There are startling little surprises within every poem. Whether it be the timbering of antique trees or observations felt while peeing outside on a cold night, Keith’s speakers go to those places most often hide from. It is with sincere honesty and an unabashed desire to exhibit the difficult that this collection grips any who read it.

A Bird-while. In a natural chronometer, a Bird-while may be admitted as one of the metres, since the space most of the wild birds will allow you to make your observations on them when they alight near you in the woods, is a pretty equal and familiar measure (Ralph Waldo Emerson's Journal, 1838). Without becoming didactic or pedantic about the spiritual metaphor hidden in the concept of the bird-while, Keith Taylor's collection evokes certain Eastern meditative poets who often wrote in an aphoristic style of the spirit or the mind mirroring specific aspects of the natural world.

The Bird-while is a collection of forty-nine poems that meditate on the nature-both human and non-human-that surrounds us daily. Taylor is in the company of naturalist poets such as Gary Snyder and Mary Oliver-poets who often drew from an Emersonian sensibility to create art that awakens the mind to its corresponding truths in the natural world. The book ranges from the longer poem to the eight line, unrhymed stanza similar to that of the T'ang poet Han-Shan. And without section breaks to reinforce the passing of time, the collection creates greater fluidity of movement from one poem to the next, as if there is no beginning or end, only an eternal moment that is suspended on the page. Tom Pohrt's original illustrations are scattered throughout the text, adding a stunning visual element to the already vivid language. The book moves from the author's travel accounts to the destruction of the natural world, even species extinction, to more hopeful poems of survival and the return of wildness. The natural rhythm is at times marred by the disturbances of the twenty-first century that come blaring into these meditations, as when a National Guard jet rumbles over the treeline upsetting a hummingbird, and yet, even the hummingbird is able to regain its balance and continue as before. At its core, Taylor's collection is a reminder of Emerson's idea that natural facts are symbols of spiritual facts. These well-crafted poems will be easily accessible to any literary audience, with a more particular attraction to readers of contemporary poetry sensitive to the marriage of an Eastern sensibility with contemporary American settings and scenes.
Keith Taylor teaches at the University of Michigan. He has published many books over the years: collections of poetry, a collection of very short stories, co-edited volumes of essays and fiction, and a volume of poetry translated from Modern Greek. Tom Pohrt is a self-taught artist who has illustrated numerous books including The New York Times bestseller Crow and Weasel by Barry Lopez. He recently illustrated Terrapin and Other Poems by Wendell Berry and Careless Rambles, a selection of poems by John Clare. He lives in Ann Arbor, Michigan.