Words That Matter: How the News and Social Media Shaped the 2016 Presidential Campaign (Paperback) 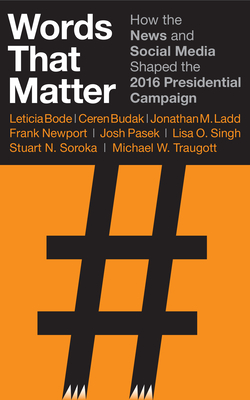 Words That Matter: How the News and Social Media Shaped the 2016 Presidential Campaign (Paperback)

The 2016 presidential election campaign might have seemed to be all about one man. He certainly did everything possible to reinforce that impression. But to an unprecedented degree the campaign also was about the news media and its relationships with the man who won and the woman he defeated.

Words That Matter assesses how the news media covered the extraordinary 2016 election and, more important, what information--true, false, or somewhere in between--actually helped voters make up their minds. Using journalists' real-time tweets and published news coverage of campaign events, along with Gallup polling data measuring how voters perceived that reporting, the book traces the flow of information from candidates and their campaigns to journalists and to the public.

The evidence uncovered shows how Donald Trump's victory, and Hillary Clinton's loss, resulted in large part from how the news media responded to these two unique candidates. Both candidates were unusual in their own ways, and thus presented a long list of possible issues for the media to focus on. Which of these many topics got communicated to voters made a big difference outcome.

What people heard about these two candidates during the campaign was quite different. Coverage of Trump was scattered among many different issues, and while many of those issues were negative, no single negative narrative came to dominate the coverage of the man who would be elected the 45th president of the United States. Clinton, by contrast, faced an almost unrelenting news media focus on one negative issue--her alleged misuse of e-mails--that captured public attention in a way that the more numerous questions about Trump did not.

Some news media coverage of the campaign was insightful and helpful to voters who really wanted serious information to help them make the most important decision a democracy offers. But this book also demonstrates how the modern media environment can exacerbate the kind of pack journalism that leads some issues to dominate the news while others of equal or greater importance get almost no attention, making it hard for voters to make informed choices.