I Can Make a Train Noise (Hardcover) 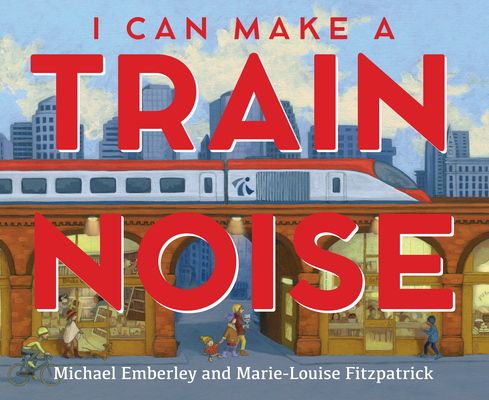 I Can Make a Train Noise (Hardcover)


On Our Shelves Now
In this rhythmic read-aloud, all you need is an imagination to experience the thrill of a great train ride.

When a girl shouts "I can make a train noise, now!" her imagination transforms a coffee shop into a zooming train, and her words clickity-clack across the tracks and blare like a train horn.

In a flash, salt shakers and ketchup bottles become skyscrapers, and the girl's voice rattles along the tracks with "I can make a train noise I can make a train noise." Her voice whistles "Nowowwwwww!" The propulsive, rhythmic text that mimics train sounds is sure to captivate all kids, pair it with gorgeously detailed artwork and you have a read-aloud like no other.

Michael Emberley, is the author and artist of many acclaimed children's books, including most notably It's Perfectly Normal.

Marie-Louise Fitzpatrick is one of Ireland's most distinguished illustrators of books for children.


A BookPage Best Book of the Year
A Junior Library Guild Gold Standard Selection
Michael Emberley has been writing and illustrating children's books since 1979. He is best known for illustrating Robie Harris's It's Perfectly Normal. He lives in Ireland.

Marie-Louise Fitzpatrick is one of Ireland's most prominent author-illustrators whose picture books include There and I Am I. She has also written novels including Hagwitch and Dark Warning and is the winner of 10 CBI Book of the Year Awards.
"Michael Emberley and Marie-Louise Fitzpatrick run a picture book along a single track of prose in "I Can Make a Train Noise," a railway excursion for children ages 3-6 that unfolds through imaginative and sophisticated illustrations. . . . Reading this book out loud, it is impossible not to make a train noise—and that, for children, will be the joy of it."—The Wall Street Journal

★ "A fully choreographed, immersive journey. . . . I Can Make a Train Noise is a perfect choice for reading aloud. Young readers will eagerly hop aboard again and again. ."—BookPage, Starred Review

★ "Fitzpatrick (Owl Bat Bat Owl) shows in thought bubbles that picture how the passengers’ moods have lifted. Emberley (Baby’s Firsts) celebrates the power of children to live in many worlds at once—and, at the same time, the power of trains to make journeys communal."—Publishers Weekly, Starred Review

★ "Lush with colorful and richly detailed illustrations, this ­innovative picture book compels its readers to get on board with the sound, speed, and rhythm of a train powered by a child's imagination."—The Horn Book, Starred Review

"a story that begs to be read aloud. The spreads are filled with details; scenes in the cafe give readers peeks at people’s thoughts via speech bubbles filled with visuals. Assured lines convey the horizontal movement of the train, which makes for compelling page-turns. The clipped pace of the narrative delights. . . . Exhilarating." —Kirkus Reviews

"Creative placement of words and the size of the font guides the reader’s rhythm and volume, making reading aloud a must."—Booklist