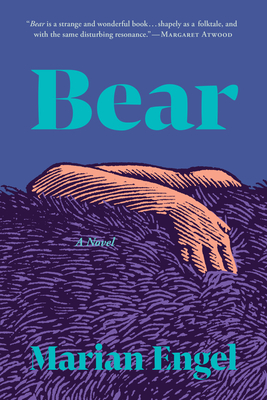 Marian Engel was one of Canada's most celebrated and provocative writers, and Bear was her last and most controversial novel. It follows a young archivist who's sent to an old and secluded house. Once there, she discovers the deceased kept a bear, which provides good company. Shocking company. This is a treasure, and I absolutely recommend it.

Controversial, unsettling, shocking. This is the story of a 27-year-old, lonely, woman who, alone on an island, who discovers an obsessive passion--one that breaks an ancient taboo and that could very well become deadly. "A quietly sensual, feminist story."--The New Yorker

Lou, a shy and secretive young librarian is called to a remote Canadian island to inventory the estate of the recently deceased Colonel Cary. In a cabin on the island, she discovers the colonel had a secret as well. A bear is chained inside. Fascinated, Lou brings the bear into the house and slowly gains the animal's trust. She sinks her fingers into the bear's fur--and soon realizes her darkest desire is for this large, powerful animal to be her lover. But there's more to the story than the price to be paid for forbidden passion. This novel by award-winning author Marian Engel works within the logic of a fever dream as the young woman comes to an even greater, and unexpected, understanding of herself. Bear was first published in 1976 and won the Canadian Governor General's Award for English-language fiction. The novel has retained its power to shock, disturb, and move readers today.