12 Short Stories and Their Making: An Anthology with Interviews (Paperback) 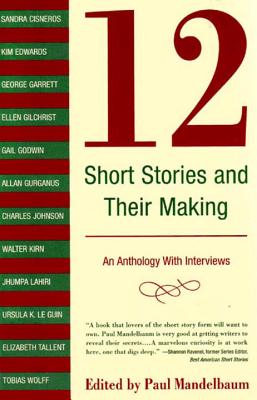 12 Short Stories and Their Making: An Anthology with Interviews (Paperback)

How did they do it? Twelve spellbinding stories, followed by interviews with the authors about inspiration and craft.

Here is a fascinating and enlightening book for fiction readers and writers alike. Written by some of our most powerful contemporary authors, the twelve stories gathered here were selected as striking examples of one of the six elements of the craft: character, plot, theme, structure, voice, and setting. They draw the reader into worlds that seem miraculously whole. How was this accomplished? In interviews that center on the aspect of craft each story exemplifies, the authors describe the challenges they faced and reveal the often disorderly process behind the seamless finished work.

Paul Mandelbaum is a graduate of the Iowa Writers' Workshop, a former managing editor of Story magazine, and the author of Garrett in Wedlock: A Novel-in-Stories. He teaches writing and literature at Emerson College's Los Angeles Center and in the UCLA Extension Writers' Program, and lives in Culver City, California.