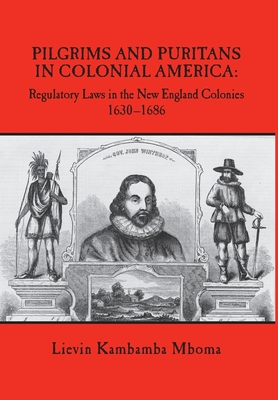 PILGRIMS AND PURITANS IN COLONIAL AMERICA: Regulatory Laws in the New England Colonies, 1630-1686, gives an account of the regulatory laws promulgated in the New England colonies by the general courts for the organization of schools, price control, military training, employment, and wage control. In addition, this book recounts the duties of lawmakers and the methods utilized for the promulgation of these many laws. Examples of these include examinations of colonial laws such as the Massachusetts Body of Liberties, the Connecticut Code of 1650, and the Rhode Island code law of 1663. Furthermore, this work investigates the demographic history of the founders of the New England colonies like John Winthrop, John Cotton, Roger Williams, Rev. John White, Roger Ludlow, Thomas Hooker, John Haynes, Rev. John Davenport, and Theophilus Eaton. The data regarding the founders of New England is significant because it correlates with the laws they enacted for the regulation of the economy, religions, courts, employment, and schools.

Moreover, data pertaining to New England colonists reveal pertinent information on their governing styles, as well as the maintenance of law and order. In this book, the academic institutions that the colonists attended in England and Scotland are attentively examined. Historically, many New England colonists were alumni from Cambridge and Oxford. With those academic degrees, they established civilized colonies in accordance with Christian values they acquired from universities in England. This largely shared culture has been subsequently observed by Anglo-Americans.

As noted previously, the book also discusses the discovery missions conducted by English subjects in North America. The work of explorers such as Captain John Smith, Sebastian Cabot, and his children is pieced together. In a like manner, the impacts made by English explorers such as Sir Francis Drake, Sir John Hawkins, and Plymouth and Bristol merchants are noted. This work also points out the contributions made by the crowns of England for the completion of discovery missions in the same region. The impacts made by King Henry VII, King Henry VIII, Queen Elizabeth, King Edward VI, King James I, and King Charles I were investigated. Equally, the formation of the Plymouth Company and the Council for New England, which served as catalysts for the founding of the New England colonies, are analyzed. Similarly, the incorporation of the same organizations is elucidated. The Council of New England was a body that had the legal power to sell land to the architects of the planting of colonies in New England.

Finally, school regulations in the New England colonies are saliently examined. The establishment of domestic, dame, elementary, grammar, and private schools is detailed in this work. The schools in the colonies followed the same model as the English schools. The contributions of monks and religious leaders in the building of schools in England are stated. Additionally, the book explores the history of Harvard University, pointing out the duties of the overseers of the college, the corporation of the institution, and the assistance of poor scholars. Moreover, the judiciary jurisdiction of Harvard College is briefly detailed.