Carolina Soul: The Down Home Taste of the Carolinas (Paperback) 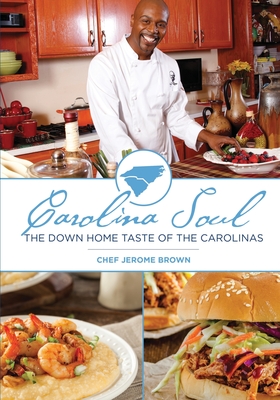 Carolina Soul: The Down Home Taste of the Carolinas by Chef Jerome Brown, Personal Chef to the Stars showcases a compilation of family recipes, client favorites and low-calorie meals featuring frog legs, oxtails, marsala meatloaf, and other Southern delicacies indigenous to North and South Carolina.

"I put everything I could into this book, and I did it with love," said Chef Rome, who has cooked for athletes and celebrities such as Shaquille O'Neal, Colin Powell, Byron Cage and Cam Newton. The former Food Network Star and featured Epcot International Food & Wine Festival chef prides himself on putting a healthy spin on Southern cuisine, helping many of his clients, like former NBA great Shaquille O'Neil, lose weight.

Chef Rome has shared his passion for cuisine with a variety of A+ list celebrities, dignitaries and elite professional athletes such as Colin Powell, Shaquille O'Neal, Lamman Rucker, Priscilla Presley, Star Jones, Nancy Kerrigan, Carl Gustaf (King of Sweden), Byron Cage, Mike Bibby, Cam Newton and more. He has earned an international reputation for being trustworthy and results driven. "Chef Rome allowed me, for the first time in my entire career, to lose weight while inactive" stated retired NBA superstar Shaquille O'Neal.

Chef Rome was a featured celebrity Chef for two years at the prestigious Epcot International Food & Wine Festival. He has been featured at the Taste of Chicago, the world's largest outdoor food festival.