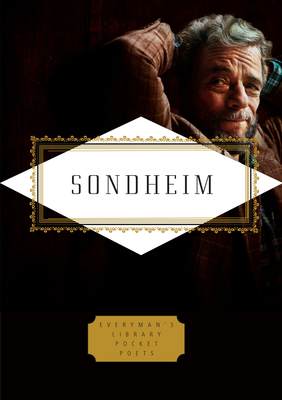 Legendary composer and lyricist Stephen Sondheim made his Broadway debut with West Side Story in 1957 at the age of twenty-seven. His remarkable and wide-ranging career has spanned more than six decades since then, and he has accumulated accolades that include eight Tony Awards, an Academy Award, eight Grammy Awards, six Laurence Olivier Awards, a Pulitzer Prize, the Kennedy Center Honors, and a Presidential Medal of Freedom. Sondheim redefined musical theater with his groundbreaking work, combining words and music in ways that are by turns challenging, moving, witty, profound, and never less than exhilarating.

This volume includes a selection of lyrics from across his career, drawn from shows including West Side Story, Gypsy, Company, Follies, A Little Night Music, Sweeney Todd, Sunday in the Park with George, Into the Woods, and more. The result is a delightful pocket-sized treasury of the very best of Sondheim.
STEPHEN SONDHEIM wrote award-winning music and lyrics for theater, film, and television. He is the author of Finishing the Hat: Collected Lyrics (1954-1981) and Look, I Made a Hat: Collected Lyrics (1981-2011). He is also the coauthor of the film The Last of Sheila and the play Getting Away with Murder. Sondheim was on the council of the Dramatists Guild of America, having served as its president from 1973 to 1981. He lived in New York City. He died in 2021.

RUSSELL PERREAULT was the executive director of publicity and social media for Penguin Random House's Vintage Anchor imprint and for the Everyman’s Library series of hardcover classics at Alfred A. Knopf. He died in 2019.

PETER GETHERS is a novelist, publisher, and screenwriter, and author of the bestseller The Cat Who Went to Paris. Under the pseudonym Russell Andrews, he has written the bestselling thrillers Gideon and Icarus. He lives in New York City, Sag Harbor, and Sicily.