The Death of the Artist: How Creators Are Struggling to Survive in the Age of Billionaires and Big Tech (Hardcover) 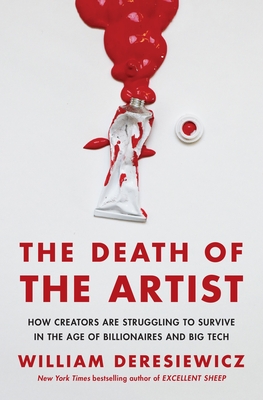 A deeply researched warning about how the digital economy threatens artists' lives and work—the music, writing, and visual art that sustain our souls and societies—from an award-winning essayist and critic

There are two stories you hear about earning a living as an artist in the digital age. One comes from Silicon Valley. There's never been a better time to be an artist, it goes. If you've got a laptop, you've got a recording studio. If you've got an iPhone, you've got a movie camera. And if production is cheap, distribution is free: it's called the Internet. Everyone's an artist; just tap your creativity and put your stuff out there.

The other comes from artists themselves. Sure, it goes, you can put your stuff out there, but who's going to pay you for it? Everyone is not an artist. Making art takes years of dedication, and that requires a means of support. If things don't change, a lot of art will cease to be sustainable.

So which account is true? Since people are still making a living as artists today, how are they managing to do it? William Deresiewicz, a leading critic of the arts and of contemporary culture, set out to answer those questions. Based on interviews with artists of all kinds, The Death of the Artist argues that we are in the midst of an epochal transformation. If artists were artisans in the Renaissance, bohemians in the nineteenth century, and professionals in the twentieth, a new paradigm is emerging in the digital age, one that is changing our fundamental ideas about the nature of art and the role of the artist in society.

William Deresiewicz is an award-winning essayist and critic, frequent speaker at colleges and other venues, and former professor of English at Yale. His writing has appeared in The Atlantic, Harper’s, the New York Times, The American Scholar, and many other publications. He is the recipient of a National Book Critics Circle award for excellence in reviewing and is the New York Times bestselling author of Excellent Sheep, The Death of the Artist, and A Jane Austen Education.

“Deresiewicz astutely examines the state of the arts in contemporary culture . . . [painting] a vivid picture of the challenges involved in making art, finding an audience, and being self-supporting as an artist. . . . A savvy assessment of how artists can, and should, function in the marketplace.”
—Kirkus Reviews

“Bracing, revolutionary and meticulously sourced. This kind of truth-telling and myth-shattering is in short supply in the music and art worlds. Deresiewicz is one of the great advocates for artists in the new digital economy, and his book is the most refreshing wake-up call for young artists that I have ever read.”
—Rosanne Cash, singer-songwriter

"From one of our bravest, fiercest critics, The Death of the Artist is a devastating anatomization of the creative life in the age of digital reproduction. Through a moving portrait of artists pushed to penury and humiliation by an economic system engineered to exploit them, William Deresiewicz shows that the cultural life of a nation can be only as healthy as the condition of its democracy. To any working (or begging) artist, the plights described will be as familiar as a recurring nightmare."
—Nathaniel Rich, author of Losing Earth: A Recent History

"For some time now, rising inequality and declining living standards for all but the wealthiest Americans have been political and economic concerns. In The Death of the Artist, Deresiewicz, long one of the nation’s foremost literary critics, makes a compelling case that these trends have led to an artistic crisis as well, one that is easy to miss because its most dire consequence may be an absence. It's rare for a critic to turn such a sympathetic and penetrating eye not only to art that is being created—but to that which isn’t. But Deresiewicz demonstrates the way our current system, while it enriches tech giants, impoverishes all but a handful of artists. When the vast majority of artists are unable to support themselves and focus on their work, we lose what they might have created. It's art itself that is in peril. This is a wise, sensitive, and shrewd book from an author who has proved himself to be essential, not only as a critic of art but of the society that produces it."
—Adelle Waldman, author of The Love Affairs of Nathaniel P.

"In The Death of the Artist, cultural critic Bill Deresiewicz pulls no punches. Through intimate portrayals of the lives of working artists, he lays bare how gentrification, Big Tech, and unbridled capitalism are sucking artists dry. He then doubles back on the historically flawed relationship between art and money, mounting a convincing moral argument that it is unacceptable to reap huge profits from artists' works while paying next to nothing for them. Incisive, revealing, insistent, and inspiring, The Death of the Artist is a love letter to the beauty and new truths which enrich us—art itself—and a rallying cry for those who produce art in order to stay alive."
—Julie Lythcott-Haims, New York Times bestselling author of How to Raise an Adult and Real American

“Deresiewicz is a provocateur who challenges the status quo and myths surrounding the relationship of artists to work and money. He is an excellent and curious guide, leading readers with both an empathic gaze and a kind of fearlessness that should leave anyone interested in the subject wide awake and a bit shaken.”
—Liz Lerman, MacArthur Award–winning choreographer

"William Deresiewicz’s excellent new book, The Death of the Artist, offers a lively, candid, and sobering account of what it’s like to be any kind of artist in America today. The fact is that they are starving: revenues that once went to creators now go to tech companies, and creators can barely survive. Their future may depend on collectives like the Authors Guild, who have supported writers on a national level for over a century. Bravo to Deresiewicz for showing us the extent of this crisis in the arts.”
—Roxana Robinson, author of Dawson’s Fall, and former President of the Authors Guild

"The Death of the Artist is the most important assessment of the state of the arts economy in over 50 years and a masterful handling of the artist's central role in that economy as it has evolved over time. The narrative style is honest, direct, reader-friendly, and personally engaged. With his many interviews and individual case studies, Deresiewicz does a terrific job of giving voice to artists. The results are daunting, inspiring, and, dare I say, loving. His empathy and respect for artists will be a comfort as he leads them to the few hopeful pathways of survival left. I applaud his call for diversity, arresting appraisal of the consequences of gentrification, and devastating exposure of the lie that tech is a panacea for the arts. That he not only indicts the culture that 'kills' artists but also helps artists understand the options available to them makes this book an indispensable beacon."
—Susan Solt, former movie producer (Doc Hollywood, Presumed Innocent), former Dean of Theater at CalArts, and Distinguished Professor and former Dean of the Arts at UC Santa Cruz