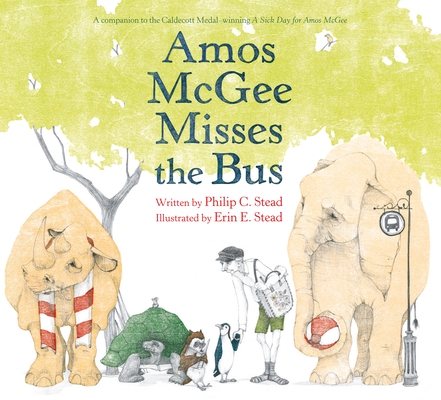 “Amos McGee and his crew of delightful animal friends are proof that humor and levity can exist in a completely sincere and heartfelt story. With a surprise ending and Philip and Erin Stead’s signature style, this is another modern classic from the dynamic duo!”
— Molly Olivo, Barstons Child's Play, Washington, DC

In this sequel to Caldecott-winning A Sick Day for Amos McGee, the Steads deliver an adventurous, kind-hearted tale of Amos, the zookeeper, and his missing hat. A perfect book for the little ones—my 3-year-old asked to read this over and over—but also a book parents won’t tire of, either. My favorite book of the year.

Hooray! Our good friends are back!

Amos McGee, a friendly zookeeper, is very considerate and always on time. But after a late night planning a surprise for all his friends, Amos is tired. So tired, in fact, that he falls asleep during breakfast and misses his bus to the zoo!

Now he knows he won't have time for the surprise he planned for his friends. Unless... perhaps his friends can step in and help him out.

Ten years after the phenomenally successful, Caldecott Medal-winning classic, A Sick Day for Amos McGee, we are reunited with the gang in a brand new, heartwarming story from acclaimed author Philip C. Stead and award-winning illustrator, Erin E. Stead.
.

*"[A] worthy sequel to the Caldecott-winning A Sick Day for Amos McGee...In a world of sickness, strife, and stridency, it is a pleasure to spend time again with Amos McGee and his zoo friends." - School Library Journal, starred review

*"Wholly delightful follow-up that also stands well on its own." - Booklist, starred review

"An elegant and assured addition to the gentle world of Amos and his friends." - Horn Book

"Erin Stead’s familiar pencil and woodblock art evinces old school charm, with soft dappling, scratchy linework, and a muted palette. Fans can only hope that Amos and pals continue their shenanigans in future titles." - The Bulletin of the Center for Children's Books (BCCB)