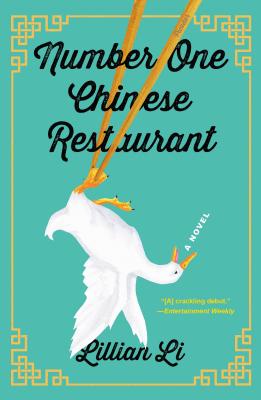 “Lillian Li’s debut novel is a prism of cross-generational immigrant perspectives set in the fiery, fast-paced, and zany confines of the Beijing Duck House, a Chinese restaurant. Adorned in embroidered dragons and phoenixes and draped with gold tassels, the Duck House is all the stuff of our Chinese takeout fantasies! More than that, it is the Han family’s legacy—a place where veteran waiters Nan and Ah-Jack have built their lives, and where the next generation, Annie and Pat, work out their post-pubescent awkwardness. In the midst of disaster, this colorful cast of characters illustrate a rich and heartfelt story about culture, self-examination, and how family can be defined outside of bloodlines.”
— Thu Doan, Brazos Bookstore, Houston, TX

This luminous debut novel takes us inside the complex lives and loves of the owners and employees of an established Chinese restaurant in suburban DC. It is rich with detail, humor (“Vegetarian? Isn’t life hard enough?”), and, most importantly, wisdom about human nature—how we can spend a lifetime trying to “crawl out from under the shadow of our family;” how our entangled relationships can sap our energy and bring equal parts joy and misery to our lives. It is about appearances vs. reality—how impossible it is to truly know someone. It is about how those who seem to have “the instruction manual to life” often don’t have a clue. This enthralling, imperfect cast of characters could stun me with their capacity for cruelty to each other, but then could melt away my harsh judgments as they attempt to turn their lives around and forgive. Lillian’s talent for storytelling, her wisdom, and her imagination captivated me from the first rich, bustling restaurant scene to the last somber, reflective page. Brava, Lillian!

Growing up in a small town in the sixties, my first experience of Chinese food served table side in a grand manner was on our annual vacation to visit family. Just like the suburban D.C. Duck House in Lillian Li's poignant novel "Number One Chinese Restaurant," the Empress restaurant--near the White House!--boasted about its Peking Duck. My inexperienced tastebuds usually skipped it for salty sweet Mu shu pork, a big step up at least from the canned chow mein at home. The Duck House connects three generations of a restaurant dynasty and three star-crossed pairs of lovers, lovers who are about to find out, that like a good stir fry, timing is everything. This is a masterful debut. I came for the fun Chinese restaurant setting, but I stayed for the characters.

"Love came slowly," Lillian Li writes, "as weaknesses in the body often do." Reader, I have a feeling you'll grow as weak for this book and its characters as I did. Here are people who drive drunk, commit arson, have affairs both physical and emotional. They also wash one another's feet, chide themselves for forgetting the name of a friend's favorite candy, save each other food after grueling shifts. Throughout this magnificent novel, Li uncovers lives that are wedged between competing truths: that cruelty often arises from the same impulse as kindness, that family is as much a burden as it is a blessing. Uncovers, in other words, the ugly, merciful truths of being human.

"A joy to read—I couldn't get enough."
—Buzzfeed

An exuberant and wise multigenerational debut novel about the complicated lives and loves of people working in everyone’s favorite Chinese restaurant.

The Beijing Duck House in Rockville, Maryland, is not only a beloved go-to setting for hunger pangs and celebrations; it is its own world, inhabited by waiters and kitchen staff who have been fighting, loving, and aging within its walls for decades. When disaster strikes, this working family’s controlled chaos is set loose, forcing each character to confront the conflicts that fast-paced restaurant life has kept at bay.

Owner Jimmy Han hopes to leave his late father’s homespun establishment for a fancier one. Jimmy’s older brother, Johnny, and Johnny’s daughter, Annie, ache to return to a time before a father’s absence and a teenager’s silence pushed them apart. Nan and Ah-Jack, longtime Duck House employees, are tempted to turn their thirty-year friendship into something else, even as Nan’s son, Pat, struggles to stay out of trouble. And when Pat and Annie, caught in a mix of youthful lust and boredom, find themselves in a dangerous game that implicates them in the Duck House tragedy, their families must decide how much they are willing to sacrifice to help their children.

Generous in spirit, unaffected in its intelligence, multi-voiced, poignant, and darkly funny, Number One Chinese Restaurant looks beyond red tablecloths and silkscreen murals to share an unforgettable story about youth and aging, parents and children, and all the ways that our families destroy us while also keeping us grounded and alive.

Lillian Li received her BA from Princeton and her MFA from the University of Michigan. She is the recipient of a Hopwood Award in Short Fiction, as well as Glimmer Train’s New Writer Award. Her work has been featured in Guernica, Granta, and Jezebel. She is from the D.C. metro area and lives in Ann Arbor, Michigan. Number One Chinese Restaurant is her first novel.

NAMED A BEST BOOK OF THE YEAR BY NPR, Real Simple, Bustle, and The Wall Street Journal
Long Listed for The Center for Fiction's 2018 First Novel Prize
An Indie Next Pick for July

"So expertly does first-time novelist Lillian Li conjure the Beijing Duck House, a gaudy, tatterdemalion restaurant in Rockville, Md., that readers of Number One Chinese Restaurant can almost taste its signature dish and feel the heat of its woks. . . . By turns darkly funny and heartbreaking."
—The Wall Street Journal

"A deliciously comic debut novel about secrets, scandal, and the patriotism at the heart of the hustle."
—O, The Oprah Magazine

"Evocative. . . . Li's novel revolves around the tangled inner workings of the family-owned Beijing Duck House . . . Chinese-born family members and workers [for whom] the Beijing Duck House has displaced Beijing itself as 'the heart-center of the universe.' . . . [Li's writing] engrosses."
—New York Times Book Review

"Li shines in portraying lives shaped by work in this service industry . . . [rewarding] readers with a compelling family story about love, work, and what it means to serve."
—USA Today

"[Li] never loses control of this tight, well-paced story, delivering tragedy, dark humor, and even a few surprises by the end."
—Shondaland

“[Li] writes with a confidence that suggests decades of experience. . . . Imaginative and evocative . . . [Number One Chinese Restaurant] is an insightful and elegant novel, beautifully written and with an impressively large and diverse cast of characters.”
—The Guardian

"A wonderfully honest portrait of what it takes to make it in America."
—The Village Voice

"Blends delicious writing with intricate family dynamics, the perfect recipe for a page-turner to devour in the summer sun."
—amNew York

“A darkly comic novel about complicated families—those created by blood and those forged through circumstance. With wit and heart, Li explores a Chinese-American community torn between ambition and loyalty as each character strives for a world bigger than the restaurant that has bound them together. An exciting debut.”
—Brit Bennett, New York Times bestselling author of The Mothers

“Li takes us into the world of restaurants that many Americans frequent, but don’t understand. The Beijing Duck House . . . is a neighborhood staple, but the labor of the owner, staff, and cooks is invisible. Li brings that world to life, giving readers a glimpse into what it takes to keep establishments running and serving soul-stirring food.”
—Bitch Media

“[Number One Chinese Restaurant] is a lot of things . . . a multigenerational immigration story, an insider look at the often grueling life of the career server or line cook, a romance, a coming-of-age (at any age). Most significantly, it is a joy to read—I couldn't get enough.”
—Buzzfeed

"A smart combination of Chinese-American life, service industry travails, and the ups and downs of belonging to a family, Number One Chinese Restaurant will make great discussion fare for book clubs."
—Shelf Awareness (starred review)

"Darkly hilarious. . . . Number One Chinese Restaurant is anything but typical, as Li combines broiling anger and slow-simmering love in delicious proportions."
—BookPage

“Lillian Li is a brilliant young writer and someone to watch. Her work understands human secrets generally as well as secret places both in the world and in the mind; her narratives are complex, mysterious, moving, and surprising.”
—Lorrie Moore, New York Times bestselling author of Bark and Birds of America

“I adored the vitality of this deviously charming and smart debut. Full of impassioned and ever-yearning characters, the novel practically thumps with heartache and sharp humor. The prose sparkles, too, with the rhythm and sting of exquisitely close observation and hard-earned wisdom, announcing Lillian Li as a striking new literary talent.”
—Chang-rae Lee, New York Times bestselling author of On Such a Full Sea and Native Speaker

“Li vividly depicts the lives of her characters and gives the narrative a few satisfying turns, resulting in a memorable debut.”
—Publishers Weekly

"Evoking every detail of [this restaurant] with riveting verisimilitude . . . Li's sense of the human comedy and of the aspirations burning in each human heart puts a philosophical spin on the losses of her characters. . . . A writer to watch."
—Kirkus

“If a Chinese restaurant can be seen as a kind of cultural performance, Lillian Li takes us behind the scenes to offer a richly engrossing story of overlapping intrigues—commercial, generational, and romantic. She conjures the 'eco-system' of this workplace with insider acuity and renders her bustling, hustling clan of waiters, hostesses, cooks, and managers with brilliant feeling. Number One Chinese Restaurant is a vibrant, memorable debut.”
—Peter Ho Davies, author of The Fortunes

"Li has crafted complex and nuanced characters . . . bringing depth and shape to the lives of those often found behind the scenes."
—Asian Review of Books

“A heady read of parents and children, youth and aging, and above all what it means to be family and how far we are willing to go to give it all up."
—The Hungry Reader