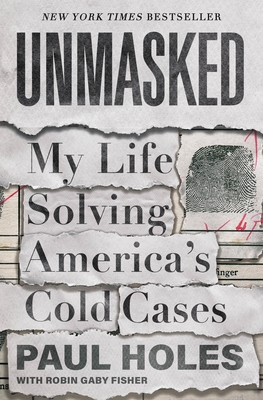 “Cold case investigator Paul Holes takes us behind the crime scene tape as he revisits some of his most notorious cases. Riveting and at times unsettling, Unmasked adeptly straddles the line between personal memoir and tell-all.”
— Tarin Paradise, Naughty Dog Books, Nashville, IN

"It’s a mark of the highest honor when I say it’s even more riveting than an episode of 'Dateline'."
—The New York Times

From Paul Holes, the detective who found the Golden State Killer, Unmasked is a memoir that "grabs its reader in a stranglehold and proves more fascinating than fiction and darker than any noir narrative." (LA Magazine)

I order another bourbon, neat. This is the drink that will flip the switch. I don’t even know how I got here, to this place, to this point. Something is happening to me lately. I’m drinking too much. My sheets are soaking wet when I wake up from nightmares of decaying corpses. I order another drink and swig it, trying to forget about the latest case I can’t shake.

Crime solving for me is more complex than the challenge of the hunt, or the process of piecing together a scientific puzzle. The thought of good people suffering drives me, for better or worse, to the point of obsession. People always ask how I am able to detach from the horrors of my work. Part of it is an innate capacity to compartmentalize; the rest is experience and exposure, and I’ve had plenty of both. But I have always taken pride in the fact that I can keep my feelings locked up to get the job done. It’s only been recently that it feels like all that suppressed darkness is beginning to seep out.

When I look back at my long career, there is a lot I am proud of. I have caught some of the most notorious killers of the twenty-first century and brought justice and closure for their victims and families. I want to tell you about a lifetime solving these cold cases, from Laci Peterson to Jaycee Dugard to the Pittsburg homicides to, yes, my twenty-year-long hunt for the Golden State Killer.

But a deeper question eats at me as I ask myself, at what cost? I have sacrificed relationships, joy—even fatherhood—because the pursuit of evil always came first. Did I make the right choice? It’s something I grapple with every day. Yet as I stand in the spot where a young girl took her last breath, as I look into the eyes of her family, I know that, for me, there has never been a choice. “I don’t know if I can solve your case,” I whisper. “But I promise I will do my best.”

It is a promise I know I can keep.

In 2018, Paul Holes retired as a cold case investigator after spending more than twenty-seven years working in Contra Costa County, in the San Francisco Bay Area. Paul specialized in cold case and serial predator crimes, lending his expertise to notable cases, including the murder of Laci Peterson and the kidnapping of Jaycee Dugard. Most prominently, Paul’s career culminated with his identification of the Golden State Killer, Joseph DeAngelo, the most notorious and cunning serial predator in U.S. history.

Since the arrest of DeAngelo, Holes has been very involved on the media side, continuing to assist law enforcement and victims’ families with their unsolved cases through the television shows The DNA of Murder with Paul Holes and America’s Most Wanted and the podcast Jensen & Holes: The Murder Squad.

Robin Gaby Fisher is a Pulitzer Prize winner and two-time finalist for feature writing. She is the author of the New York Times bestselling After the Fire.

"It’s a mark of the highest honor when I say it’s even more riveting than an episode of “Dateline."
—The New York Times

"[Paul Holes's] memoir grabs its reader in a stranglehold and proves more fascinating than fiction and darker than any noir narrative."
—Los Angeles Magazine

"Fans of true crime will love every page of Unmasked. It is a wildly engaging and painfully honest read that will appeal to anyone curious about the lives of those who pursue justice for voiceless victims."
—San Francisco Chronicle

"An exceptional memoir... his unflinching look at the emotional toll the more than 27 years he spent working in Contra Costa County in the San Francisco Bay Area took on him and his family distinguishes this from similar true crime narratives."
—Publishers Weekly, starred review

"Paul Holes takes you on a fascinating and sometimes disturbing journey inside the mind of someone who hunts monsters for a living—and in order to live. And his insights on Michelle McNamara—whose loss I still feel every day—are incredible."
—Patton Oswalt

"True-crime superstar Holes takes readers on a gripping journey into the mind of a cold-case detective…a thoughtful yet fast-paced and absorbing amalgamation of personal memoir and true-crime novel. Crime junkies and nonfiction fans will clamor to get their hands on this book."
—Booklist

"The stories [Holes] tells—and the solutions to the crimes—are fascinating. Grisly, matter-of-fact, and just the thing for aspiring detectives."
—Kirkus

"Unmasked is a stunning, brutally honest memoir about a complex, highly gifted forensic scientist who sacrificed his own personal life, even his marriage and fatherhood, in his relentless pursuit of monsters."
—Mystery & Suspense Magazine

"Paul Holes is a natural criminal profiler with a talent for describing how the process works. In his book, Unmasked, he marches the reader into the real world of criminal behavior and blends his forensic expertise with his unfiltered personal life experiences as he tackles both cold cases and modern crimes. This is a book you will not be able to put down."
—Dr. Ann Wolbert Burgess, author of A Killer By Design and co-author of Sexual Homicide