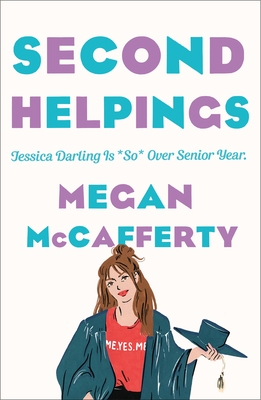 This is book number 2 in the Jessica Darling series.

Jessica Darling is in her senior year of high school and things can’t seem to get worse: her best friend, Hope, still lives in another state, and the mysterious and oh-so-compelling Marcus Flutie continues to be a distraction she doesn’t need. Not to mention her parents won’t get off her back about choosing a college, and her older sister’s pregnancy is causing quite a bit of drama in the Darling household.

The second book in Megan McCafferty’s critically acclaimed Jessica Darling series is fun, irreverent, and shows that being a teenager is never easy (or boring). Now with a foreword from New York Times bestselling author Rebecca Serle and a new author's note from Megan McCafferty!

Rebecca Serle is the New York Times bestselling author of One Italian Summer, In Five Years, The Dinner List, and the young adult novels The Edge of Falling and When You Were Mine. Serle also developed the hit TV adaptation Famous in Love, based on her YA series of the same name. She is a graduate of USC and The New School and lives in Los Angeles.

"Smart, tentative, and funny, Jessica is a likable and wry observer of the competitive, gossipy high-school world.”—Booklist on Second Helpings

“McCafferty looks at travails with humor as well as heart.” —People on Second Helpings

“Such a sharp, funny, poignant heroine, with an inner world we can all relate to. I love it.” —Sophie Kinsella, author of the New York Times bestselling Shopaholic series on Sloppy Firsts

“Megan McCafferty puts Jessica Darling through college in Charmed Thirds, and in the process turns her from a tart-tongued New Jersey high school philosopher into a heart-wrenching representation of all things uncertain. If she’s not careful, she might end up with a heroine for our times.” —Ned Vizzini, author of Be More Chill and It’s Kind of a Funny Story

“Charmed Thirds is a witty, biting, and altogether true accounting of a girl’s journey to young womanhood, complete with all of the cringe-inducing, hilarious moments of love, shame, and uncertainty that readers will remember from their own lives.” —Jennifer Weiner, author of Goodnight Nobody and Good in Bed