I You We Them: Volume 1: Walking into the World of the Desk Killer (Paperback) 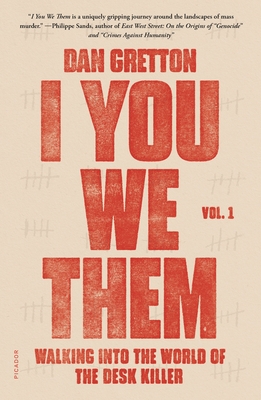 I You We Them: Volume 1: Walking into the World of the Desk Killer (Paperback)

"I You We Them is a uniquely gripping journey around the landscapes of mass murder." --Philippe Sands, author of East West Street: On the Origins of Genocide and Crimes against Humanity

Vast and revelatory, Dan Gretton’s I You We Them is an unprecedented study of the perpetrators of crimes against humanity: the “desk killers” who ordered and directed some of the worst atrocities of the modern era. From Albert Speer’s complicity in Nazi barbarism to Royal Dutch Shell’s role in the murders of the Nigerian activist Ken Saro-Wiwa and the rest of the Ogoni Nine, Gretton probes the depths of the figure “who, by giving orders, uses paper or a phone or a computer to kill, instead of a gun.”

Over the past twenty years, Gretton has interviewed survivors and perpetrators, and pored over archives and thousands of pages of testimony. His insight into the psychology of the desk killer is contextualized by the journey he took to penetrate it. Woven into the narrative are his contemplative interludes—perspectives gleaned during walks in the woods, reminiscences about a lost love, and considerations of timeless moral conundrums. The result is a genre-bending work steeped as much in personal reflection as it is in literature and historical and psychological illumination.

A synthesis of history, reportage, and memoir, I You We Them is the first volume of a groundbreaking journal of discovery that bears witness to and reckons with the largest and most pressing questions before humanity.

Dan Gretton is a writer, activist and teacher. In 1983 he co-founded the pioneering political arts organisation Platform, in Cambridge, where he studied English literature. As well as working with Platform over many years on the human rights and environmental impacts of corporations, he has also developed radical initiatives in adult education and has lectured internationally on the subject of the ‘desk killer’. After more than a decade of research, aided by a major award from the Lannan Foundation, he embarked on the writing of I You We Them. He currently divides his time between north-west Wales and east London, where he shares his garden with a family of foxes.

"It is much more than a history of bureaucratic crime. Rather, Gretton has written himself deeply and intimately into the work, which also serves as a poignant memoir; a travelogue that leads the reader through time and space, history and memory; and an extended exercise in observation and introspection." --Jonathan Kirsch, The Washington Post

"Remarkably powerful . . . [a] compelling and modern investigation of the collective amnesia which so often operates in the telling of national histories, including our own." --Mark Cocker, The Spectator (UK)

"A complex and exceptional book. Gretton's determination to bear witness so long after the events themselves does not diminish the power of his story. On the contrary his decision to make it personal intensifies the impact." --The New Statesman (UK)

"Gretton raises profoundly unsettling questions about the capacity for doing evil that exists within all of us, and the ways in which the distancing effect of technology allows perpetrators to avoid thinking about the consequences of their actions." --Hugh Linehan, The Irish Times

"The writing has the power at times to mesmerise . . . Gretton is a brave man to have stared so long and intently at the subject." --Ian Thomson, Evening Standard (UK)

"I You We Them is a uniquely gripping journey around the landscapes of mass murder." --Philippe Sands, author of East West Street: On the Origins of Genocide and Crimes against Humanity

“Great books never occur out of a desire for greatness, but often out of a possessed persistence in the face of a chosen and immensely difficult task. I You We Them is such a book. In it, though, a century speaks to us—not with the thunderous voice of history, but in the intimate voice of a sequence of confessions.” —John Berger, author of Ways of Seeing

"A book of extraordinary importance and urgency - we need this book now. For its determined, passionate, and vulnerable seeking; for its insistence on what matters. Climate catastrophe tells us the reach of the desk killer has never been greater. We must take the hope and political will in this book as our own: forged in darkness and therefore inextinguishable." —Anne Michaels, author of Fugitive Pieces

"Not since Gitta Sereny’s vast script of Into That Darkness arrived on my desk have I read anything so disturbing as the draft of Dan Gretton’s book... much more alive than anything I’ve read for ages... I’m certainly grateful for having been given the chance to read this amazing work.” —Diana Athill, author of Somewhere Towards the End