150 Glimpses of the Beatles (Paperback) 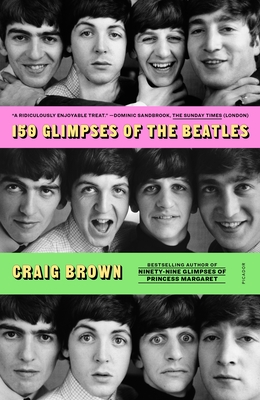 150 Glimpses of the Beatles (Paperback)

Ever wonder what it felt like to appear on The Ed Sullivan Show the same night as the Beatles? Or what became of the band’s original drummer, Pete Best? Or which Beatle would’ve played Gollum, had the Fab Four adapted Lord of the Rings? All is revealed in Craig Brown’s epic miscellany, which examines every angle of Beatlemania with razor-sharp wit and surprising tenderness. A joy of a book that’ll having you shouting yeah! yeah! yeah!

Winner of the 2020 Baillie Gifford Prize for Non-Fiction

"If you want to know what it was like to live those extraordinary Beatles years in real time, read this book.” —Alan Johnson, The Spectator

Though fifty years have passed since the breakup of the Beatles, the Fab Four continue to occupy an utterly unique place in popular culture. Their influence extends far beyond music and into realms as diverse as fashion and fine art, sexual politics and religion. When they appeared on The Ed Sullivan Show in 1964, fresh off the plane from England, they provoked an epidemic of hoarse-throated fandom that continues to this day.

Who better, then, to capture the Beatles phenomenon than Craig Brown—the inimitable author of Ninety-Nine Glimpses of Princess Margaret and master chronicler of the foibles and foppishness of British high society? This wide-ranging portrait of the four lads from Liverpool rivals the unique spectacle of the band itself by delving into a vast catalog of heretofore unexamined lore.

When actress Eleanor Bron touched down at Heathrow with the Beatles, she thought that a flock of starlings had alighted on the roof of the terminal—only to discover that the birds were in fact young women screaming at the top of their lungs. One journalist, mistaken for Paul McCartney as he trailed the band in his car, found himself nearly crushed to death as fans climbed atop the vehicle and pressed their bodies against the windshield. Or what about the Baptist preacher who claimed that the Beatles synchronized their songs with the rhythm of an infant’s heartbeat so as to induce a hypnotic state in listeners? And just how many people have employed the services of a Canadian dentist who bought John Lennon’s tooth at auction, extracted its DNA, and now offers paternity tests to those hoping to sue his estate?

150 Glimpses of the Beatles is, above all, a distinctively kaleidoscopic examination of the Beatles’ effect on the world around them and the world they helped bring into being. Part anthropology and part memoir, and enriched by the recollections of everyone from Tom Hanks to Bruce Springsteen, this book is a humorous, elegiac, and at times madcap take on the Beatles’ role in the making of the sixties and of music as we know it.

Craig Brown is a prolific journalist and author. He has been writing his parodic diary in Private Eye since 1989. He is the only person ever to have won three different Press Awards—for best humorist, columnist, and critic—in the same year. He has been a columnist for The Guardian, The Times (London), The Spectator, and The Daily Telegraph, among others. He currently writes for The Daily Mail and The Mail on Sunday. His New York Times bestseller, Hello Goodbye Hello was translated into ten languages.

Named a Best Book of 2020 by The Economist, The Evening Standard, The Guardian, The Paris Review, The Spectator, The Telegraph, TIME and The Times (UK)

“Time-play and what-ifs are part of Brown’s formidable bag of tricks, deployed to add emotional range and a poignant twist to his comic vignettes. His biographical method—combining fragments, lists, excerpts, quotes and flights of whimsy—is executed as brilliantly here as in 2017’s glittering Ninety-Nine Glimpses of Princess Margaret . . . Brown’s book is an idiosyncratic cocktail of oral history, personal memoir, tourism and biography." —Charles Arrowsmith, The Washington Post

"Brown, a perceptive writer and a gifted satirist, makes familiar stories fresh. Along the way he unearths many fascinating tidbits . . . a fascinating study of the cultural and social upheaval created by the band." —Moira Hodgson, The Wall Street Journal

"A ridiculously enjoyable treat . . . Brown . . . is such an infectiously jolly writer that you don’t even need to like the Beatles to enjoy his book . . . I loved every word of it." —Dominic Sandbrook, The Sunday Times

"The perfect antidote to these times." —Julian Barnes, The Guardian

“The author of the highly entertaining Ninety-Nine Glimpses of Princess Margaret (the princess makes an appearance in these pages, too) eschews a linear narrative in favor of correspondence, imagined outcomes that never came to pass and cascades of interviews to convey the singular cultural importance of the Beatles. This is the biography for anyone who’s wondered which Beatle Fran Lebowitz liked best. (Ringo Starr—‘the contrarian position,’ she says.)" —Joumana Khatib, The New York Times

"A brilliantly executed study of cultural time, social space and the madness of fame . . . The exceptional strangeness of the Beatles reflects the ordinary oddity of real life. [150 Glimpses of the Beatles], by putting the Beatles in their place as well as their time, is by far the best book anyone has written about them and the closest we can get to the truth." —Dominic Green, Literary Review

"Pure joy . . . The most engaging, most surprising, most thought-provoking and purely enjoyable book I’ve read in ages. Brown has as many ways to tell a story as the Beatles had to write a song . . . If you read this book, a splendid time is guaranteed” —Frank Cottrell-Boyce, The Tablet

"For those of us, like me, who are fans of [Craig Brown], as well as devotees of The Fab Four, the news last year that He was working on a new book about Them sounded like a celestial combination of writer and subject. The result is the terrific [150 Glimpses of the Beatles] . . . It is a critical appreciation, a personal history, a miscellany, a work of scholarship and speculation, and a tribute as passionate and worshipful as any fan letter." —Alex Bilmes, Esquire

"One of the best books I’ve read on any subject in a good while . . . In much the same way that the Beatles musically recreated, eulogized, and forever preserved the real Penny Lane in song, 150 Glimpses of the Beatles lets us relive what it was like to happily share the planet for a few years with a band like no other before or since." —Malcolm Jones, The Daily Beast

"Magnificent . . . There will be enough written elsewhere about [150 Glimpses of the Beatles'] witty prose, evocative mosaic structure and granular detail; the book is everything (wistful, imaginative, passionate) that Danny Boyle’s Beatles film Yesterday should have been but manifestly was not . . . As lush and layered as a jumbo box of chocolates. The effect it has had is to send me spinning off into Beatles heaven." —New Statesman

"[150 Glimpses of the Beatles] is perfect for now. It’s ingenious, wholly original (not a given, what with the subject matter), absolutely gripping, funny, sad and moving. A complete treat." —India Knight, The Sunday Times

"Craig Brown has written a long book about the Beatles—no book by Craig Brown is too long. Ringo is a friend of mine—I met him 30 years ago at Billy Connolly’s wedding on a snake-infested island near Fiji—but I have never been very interested in the Beatles. In fact I wouldn’t cross the road to see them . . . even Abbey Road. Yet I can’t put this wonderful book down." —Barry Humphries, Daily Telegraph

“Three years ago, Craig Brown invented a brilliant new form of biography with his 99 Glimpses of Princess Margaret . . . Brown ends with a delicious quote from Bryan Magee, the philosopher and politician, written in l967: “Does anyone seriously believe that the Beatles’ music will be an unthinkingly accepted part of daily life all over the world in the 2000s?” To which the obvious answer is, “yeah, yeah, yeah”. And Craig Brown has found a vastly entertaining way of celebrating it.” —Lynn Barber, Sunday Telegraph

"In this enthralling, impressionistic biography, Craig Brown examines the immense cultural impact of the Beatles 50 years on from their split. Rather than a linear retelling, he reflects and refracts the sometimes disputed legend of the Fab Four through external characters and incidental details, 'what if' chapters and personal reminiscences. This method worked a treat in [99 Glimpses of Princess Margaret] and it works even better here because the material is so much richer." —Nick Curtis, Evening Standard

“As a fan of Craig Brown’s writing, as well as of the Beatles’ music, I was trying to manage my expectations of One Two Three Four. I need not have worried. It is not only as affectionately teasing as you would hope, but also fascinating and funny.” —Nigel Farndale, The Times (London)

"A magical mystery tour . . . Brown seems to have invented a wholly new biographical form. In a polychromatic cavalcade of chapters of varying length, the man with kaleidoscope eyes conveys what it was like to live through those extraordinary Beatles years." —Alan Johnson, The Spectator