They Threw Us Away: The Teddies Saga (Paperback) 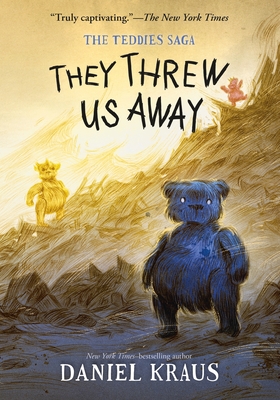 They Threw Us Away: The Teddies Saga (Paperback)

This is book number 1 in the The Teddies Saga series.

Buddy wakes up in the middle of a garbage dump, filled with a certain awareness: he’s a teddy bear; he spent time at a Store waiting for his future to begin; and he is meant for the loving arms of a child. Now he knows one more thing: Something has gone terribly wrong.

Soon he finds other discarded teddies—Horace, Sugar, Sunny, and Reginald. Though they aren’t sure how their luck soured, they all agree that they need to get back to the Store if they’re ever to fulfill their destinies. So, they embark on a perilous trek across the dump and into the outer world. With ravenous rats, screeching gulls, and a menacing world in front of them, the teddies will need to overcome insurmountable challenges to find their way home.

Equal parts Toy Story and Lord of the Flies, They Threw Us Away is the unforgettable start of a captivating series.

Daniel Kraus is the author of numerous novels, including Rotters, the Death and Life of Zebulon Finch duology, and Bent Heavens. With Guillermo del Toro, he wrote the New York Times bestselling The Shape of Water (the companion novel to the Academy Award-winning film) and Trollhunters (the inspiration for the Netflix series).

"By turns swashbuckling and reflective, touching and disturbing, this existential work of fantasy and horror considers what one is willing to sacrifice when utterly lost." —Publishers Weekly

"With a nod to Watership Down...[r]eaders with a taste for disturbing adventures and disquieting revelations will be well served." —Booklist

"Fans of Toy Story or The Velveteen Rabbit might be aghast, but readers who knew there was always something a little off about their playthings will appreciate this uniquely horrific take." —The Bulletin of the Center for Children's Books