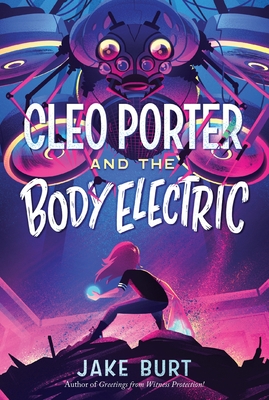 Jake Burt's Cleo Porter and the Body Electric is a futuristic middle-grade novel about a girl who lives in a hermetically sealed housing development.

In a future forever changed by a pandemic, a girl survives in total isolation.

A woman is dying. Cleo Porter has her medicine. And no way to deliver it.

Like everyone else, twelve-year-old Cleo and her parents are sealed in an apartment without windows or doors. They never leave. They never get visitors. Their food is dropped off by drones. So they’re safe. Safe from the disease that nearly wiped humans from the earth. Safe from everything. The trade-off?

They’re alone. Thus, when they receive a package clearly meant for someone else--a package containing a substance critical for a stranger’s survival--Cleo is stuck. As a surgeon-in-training, she knows the clock is ticking. But people don’t leave their units.

Not ever. Until now.

Jake Burt is the author of the middle-grade novels Greetings from Witness Protection!, an Indie Next selection, The Right Hook of Devin Velma, a Junior Library Guild selection, and The Tornado, which School Library Journal called "one of the best stories about bullying for middle grades,” in a starred review. His novel Cleo Porter and the Body Electric was praised as a "thrilling sci-fi adventure" by #1 New York Times bestselling author Alan Gratz. Jake Burt teaches fifth grade, and lives in Hamden, CT, with his wife and their daughter.

“Cleo Porter is the most compassionate, intelligent, irrepressible, admirable hero I’ve come across in years. Readers will flat-out go nuts for her. I know I did. CLEO PORTER AND THE BODY ELECTRIC would be a great book at any time. At this moment in our history, it is astonishing. Every kid - and adult - should read this!”—Gordon Korman, #1 New York Times-bestselling author

"Jake Burt must have a crystal ball because he’s written a dystopian novel set in the future that manages to feel 'of the moment.' In an antiseptic world scarred by a pandemic, our brave and courageous hero Cleo Porter embarks on an epic quest fueled by curiosity and compassion. It is a triumph of humanity and the perfect book for this time." —James Ponti, New York Times-bestselling author of City Spies

"Current readers will immediately draw parallels with the Covid-19 pandemic, but they’ll also find a well-constructed and enjoyable adventure. ...A topical read that’s worth the attention." —Kirkus Reviews

"A humorous, humanistic sci-fi adventure set in the near future, after the outbreak of a quickly mutating flu pushed citizens into sealed apartments. ... Through the eyes of a fierce and compassionate protagonist, Burt mixes snippets of science into the action, adding a layer of nonfiction to this entertaining, speculative look at selflessness and integrity." —Publishers Weekly

"In this timely addition to the “plague novel” shelves, the (seeming) misdelivery of a life-saving medicine prompts a sheltered preteen to leave her apartment for the very first time. ...Cleo especially is a winner, gifted with wells of empathy and determination deep enough to weather wild mood swings, bouts of debilitating terror, life-threatening hazards, and more than one extreme challenge to her comfortable worldview."—Booklist

Praise for Greetings from Witness Protection:

"Jake Burt is a storytelling magician. Part coming of age tale and part spy thriller, Greetings from Witness Protection could be a collaboration between Judy Blume and Ian Fleming."—Ann M. Martin, New York Times-bestselling author of Rain Reign and the Baby-Sitters Club series

"This inventive, clever story has a lot of heart at its center. Jake Burt’s debut is utterly rewarding.”—Wendy Mass, New York Times-bestselling author of The Candymakers and Jeremy Fink and the Meaning of Life

"The biggest complaint that readers may have about Burt’s debut novel is that it ends. . . endearing from page one."—Publishers Weekly, starred review

"WA funny, action-packed novel about the trials of school, parental arguments, and sibling rivalry—all with a dash of high-stakes thrills and dramatic showdowns..." —School Library Journal

"An engaging treat." —Voices of Youth Advocates
****
Praise for The Right Hook of Devin Velma:

"Spot-on sixth-grade humor and sympathetic characters will hook readers as he explores fame and friendship in the age of social media." — Publishers Weekly

"Fisticuffs ensue, but so in time do good and brave words in this goofy, affectionate tale of loyalty, family and fraternity."—Wall Street Journal

"A sweet, accessible comedy about two sixth grade boys. Short and punchy sentences get straight to the funny stuff and leave just enough unexplained to keep readers moving to the resolution. ... A wholesome, appealing, and fast-paced friendship tale."—School Library Journal