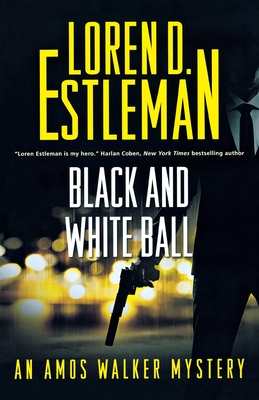 This is book number 27 in the Amos Walker Novels series.

Loren D. Estleman's most popular characters, PI Amos Walker and hit man Peter Macklin, are together in one story for the first time in Black and White Ball!

Detroit hit man Peter Macklin forces private eye Amos Walker to furnish protection for Laurie, Macklin's estranged wife, while Macklin tracks down the party who has threatened to kill her. The man Walker’s client suspects cannot be ignored; as his own grown son, Roger Macklin has inherited all the instincts, and acquired all the training, necessary to carry out his threat.

Told partly by Walker in first-person and partly by Macklin in third, Black and White Ball places the detective squarely between two remorseless killers, with death waiting whether he succeeds or fails.

"His dialogue rivals that of the late Elmore Leonard." —Booklist

"Don't Look for Me is so old-school, with its world-weary private eye, cynical villains and sultry dames, that it’s new again." —The New York Times Book Review

"For readers who mourn the passing of the classic American private eye who drinks hard liquor, ogles the dames and cracks one-liners out of the side of his mouth, Walker’s your man. And the sweet part is that he’s the genuine article--a decent guy trying to do an honest job in a society that no longer shares his working-class ethic or values his skills. Except, of course, for us.”—The New York Times Book Review on You Know Who Killed Me

"Estleman has piled up enough literary awards to add a wing to his home. Read this classic yet modern example of the hard-boiled detective novel and you'll begin to understand why."—Booklist on Infernal Angels