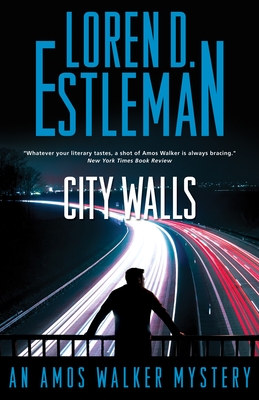 This is book number 31 in the Amos Walker Novels series.

The next Amos Walker novel from a Grand Master. “Loren D. Estleman is my hero.”—Harlan Coben

When a search for a fugitive embezzler leads Amos Walker to Cleveland, fellow visitor Emmett Yale, a leading figure in the electric-car industry in Detroit, hires the private detective to investigate the death of his stepson, Lloyd Lipton, in a random freeway shooting. Yale believes Clare Strickling, a former employee, arranged the killing to silence Lipton, who is suspected of selling illegal inside-trader information to Strickling.

Walker shadows Strickling to a private airfield, where he believes his quarry has made arrangements to fly out of the country, and witnesses Strickling’s killing—by way of a murder weapon unique to Detroit. From there, the trail twists and turns through Major Jack Flagg, an elderly barnstormer, Palm Volker, the attractive aviatrix who runs the airfield, Candido, a surly maintenance worker employed by Palm, and Gabe Parrish, the retired boxer in charge of security at Yale Mobility. Naturally, all have secrets to keep; and naturally, discovering them can be detrimental to Walker’s health.

THE AMOS WALKER SERIES:
Poison Blonde / Retro / Nicotine Kiss / American Detective / The Left-handed Dollar / Infernal Angels / Burning Midnight / Don't Look for Me / You Know Who Killed Me / The Sundown Speech / The Lioness is the Hunter / Black and White Ball / When Old Midnight Comes Along / Cutthroat Dogs / Monkey in the Middle

Other books by Loren D. Estleman:
Aces & Eights
The Ballad of Black Bart
Black Powder, White Smoke
The Book of Murdock
The Branch and the Scaffold and Billy Gashade
The Confessions of Al Capone
The Eagle and the Viper
Gas City
Jitterbug
Journey of the Dead and The Undertaker's Wife
The Long High Noon and The Adventures of Johnny Vermillion
The Master Executioner
Paperback Jack
Ragtime Cowboys
The Rocky Mountain Moving Picture Association
Roy & Lillie: A Love Story
Thunder City