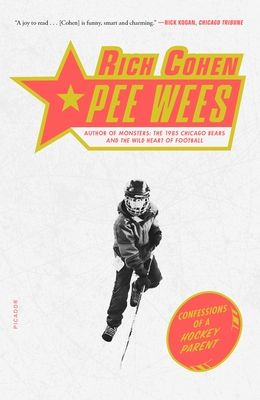 Rich Cohen, the author of The Chicago Cubs: Story of a Curse and Monsters: The 1985 Chicago Bears and the Wild Heart of Football, turns his attention to matters closer to home: his son’s elite Pee Wee hockey team and himself, a former player and a devoted hockey parent.

In Pee Wees: Confessions of a Hockey Parent, Cohen takes us through a season of hard-fought competition in Fairfield County, Connecticut, an affluent suburb of New York City. Part memoir and part exploration of youth sports and the exploding popularity of American hockey, Pee Wees follows the ups and downs of the Ridgefield Bears, the twelve-year-old boys and girls on the team, and the parents watching, cheering, plotting, praying, and cursing in the stands. It is a book about the love of the game, the love of parents for their children, and the triumphs and struggles of both.

Rich Cohen is the New York Times-bestselling author of Tough Jews, Monsters, Sweet and Low, The Sun & the Moon & the Rolling Stones, The Chicago Cubs, and The Last Pirate of New York, and, with Jerry Weintraub, When I Stop Talking, You’ll Know I’m Dead. He is the cocreator of the HBO series Vinyl, a contributing editor at Rolling Stone, and a writer at large for Air Mail. He has written for The New York Times, The New Yorker, The Atlantic, and Harper’s Magazine, among other publications. Cohen has won the Great Lakes Book Award, the Chicago Public Library’s 21st Century Award, and the ASCAP Deems Taylor Award. He lives in Connecticut.

"At its core, Pee Wees is a story about a father trying to reach his son (and perhaps his younger self) through the game. 'I was now my father. My son was now me.' A familiar tale and the makings of a great tragedy . . .While some might view this as a cautionary tale about youth hockey, I say that caring that much is the game’s most convincing selling point, its very appeal." —Bill Keenan, Air Mail

"Welcome to the world of youth hockey in Connecticut . . . What emerges for Cohen in this warmhearted memoir is a love for his son beyond hockey, as well as the acknowledgment that 'there is little to match the intoxication of seeing your child do something well.'" —Mark Rotella, The New York Times Book Review

""A must-read . . . Pee Wees is the perfect book for two groups of people: those who are involved in youth hockey and those who are not. The former will delight in seeing their struggles reflected and nod knowingly. And the rest, like me, will feel a rush of relief at having been spared the ordeal." —Neil Steinberg, The Chicago Sun-Times

"Memoirist Cohen (Sweet and Low) scores with this heartfelt account of watching—and agonizing over—his 11-year-old son’s season playing kids’ competitive hockey. Starting with April tryouts and ending with a soul-churning state tournament in March, Cohen provides a fascinating glimpse into the players’ egos and excels in profiling the parents and coaches who live and die with each shift in their children’s fortunes . . . Cohen’s soulful, poignant examination is a winning testament to the ways parents often live for—and through—their children." —Publishers Weekly