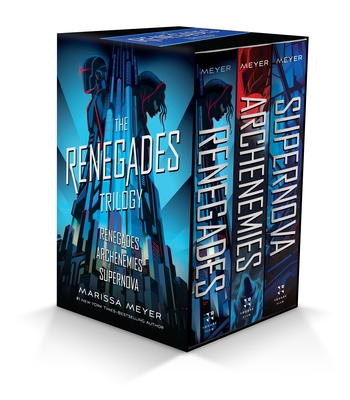 This is book number 4 in the Renegades series.

Possessed with extraordinary abilities, the Renegades are champions of justice, protecting the citizens against the Anarchists determined to destroy them.

Marissa Meyer is the #1 New York Times–bestselling author of the Renegades Trilogy, The Lunar Chronicles series, the Wires and Nerve graphic novels, and The Lunar Chronicles Coloring Book. Her first standalone novel, Heartless, was also a #1 New York Times bestseller. Marissa created and hosts a podcast called The Happy Writer. She lives in Tacoma, Washington, with her husband and their two daughters.

"In a vividly dark and fully imagined universe where special abilities are feared unless they can be strictly controlled and labeled, Meyer celebrates and subverts popular superhero tropes while mining the gray area between malevolence and virtue." —Publishers Weekly, starred review

"Tackles a familiar genre in a brand new way." —Hypable.com

"Even reluctant fans of hero fantasies will fall for the smart plot and wonderful world-building. Prepare to fangirl." —Justine Magazine

"The world is exceptionally well crafted, particularly the complex backstory of the rise of prodigies among humans, and the secondary cast of villains and heroes could give Marvel and DC a run for their money." —The Bulletin