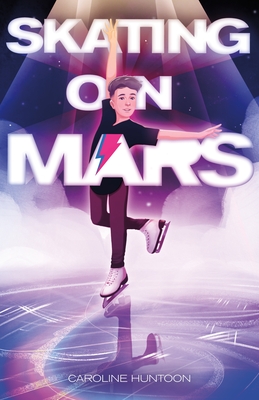 A heartwarming debut from author Caroline Huntoon about a young figure skater discovering who they are on and off the ice.

Life isn’t easy on twelve-year-old Mars. As if seventh grade isn’t hard enough, Mars is also grappling with the recent death of their father and a realization they never got to share with him: they’re nonbinary. But with their skates laced up and the ice under their feet, all of those struggles melt away. When Mars’ triple toe loop draws the attention of a high school hot shot, he dares them to skate as a boy so the two can compete head-to-head. Unable to back down from a challenge, Mars accepts. But as competition draws near, the struggles of life off the rink start to complicate their performance in the rink, and Mars begins to second guess if there’s a place for them on the ice at all.

Skating on Mars is a tender examination of grief and a hopeful middle grade tale of self-discovery.

"This timely, triumphant novel about figure skating, identity, loss, and love will move and entertain readers—and it might just inspire them to find their own ways to change the world. " —Laurie Morrison, author of Up for Air and Coming Up Short

Caroline Huntoon has always loved to tell stories, but it took a while for them to translate that love to writing books. After they graduated with a B.A. from Barnard College, Caroline wasn’t sure what to do next, so they headed to the happiest place on earth, where they worked for three years making magic before moving to Michigan to become an English teacher and theater director. It wasn’t until they earned an M.A. from The Bread Loaf School of English that they finally started writing stories for young people. Now they live in Ypsilanti, Michigan with their increasingly impetuous child, Winifred, and their adorable yet needy dog, Oscar David, both of whom allow Caroline to write after they go to sleep. Caroline writes across many genres, but their work often circles back to themes of loss, identity, friendship, and validating the messy and wonderful lives of young people.

Praise for Skating On Mars:

“Caroline Huntoon’s Skating on Mars is a rallying cry that trans and nonbinary kids belong in sports; it is also a moving story about life’s transitions, big and small. Mars is a kid you can’t help rooting for as they navigate friendships, grief, and their place within the sport of figure skating as a nonbinary athlete. Skating on Mars is an essential addition to the canon of queer sports stories.” —A. J. Sass, author of Ana on the Edge and Ellen Outside the Lines

“Mars gives us a beautiful blueprint for what to do when you’re neither/nor instead of either/or, a sparkling bolt of bold Bowie lightning in a world of black and white. Their story skated into my heart and left a smile on my face.” —Jules Machias, author of Both Can Be True and Fight + Flight

"All the gold medals for this book! Equal parts a fun, joyful story about figure skating and a nuanced, break-your-heart-and-put-it-back-together tale about grief and gender identity, Skating on Mars tackles big questions in an accessible and heartfelt fashion. Caroline's story had me rooting for Mars from the first spin to the last, triumphant triple toe loop."
—E. L. Shen, author of The Comeback

"This timely, triumphant novel about figure skating, identity, loss, and love will move and entertain readers—and it might just inspire them to find their own ways to change the world. " —Laurie Morrison, author of Up for Air and Coming Up Short

"The results are in: Skating on Mars is a must-read, all-around winning debut novel. The fierce, spirited Mars will be skating figure-eights in readers' hearts and minds long after the book comes to an end." —Michael Leali, author of The Civil War of Amos Abernathy

"We urgently need more books like this in the world: ones that remind us that LGBTQ+ kids are regular kids, with regular kid feelings, struggles, and triumphs. Skating On Mars is a sensitively written story that centers an appealing and realistic non-binary protagonist...An excellent and most welcome addition to the growing (but still too small) collection of well-written and compassionate books about young rainbow humans." —Lisa Bunker, author of Zenobia July and Felix Yz