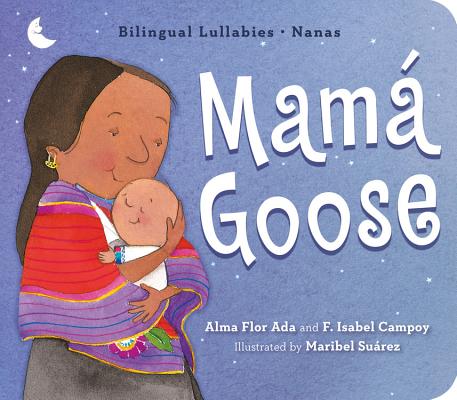 
On Our Shelves Now
This bilingual board book by acclaimed authors Alma Flor Ada and F. Isabel Campoy presents popular and beloved lullabies from all over the Spanish-speaking world. Full of charm and humor, and rich with the diversity of Latinx cultures, Mamá Goose is the perfect introduction to Latinx lullabies for English speakers, and a trove of familiar favorites for Spanish speakers.
Alma Flor Ada (almaflorada.com) is a Professor Emerita at the University of San Francisco who has devoted her life to advocacy for peace by promoting a pedagogy oriented to personal realization and social justice. A former Radcliffe Scholar at Harvard University and Fulbright Research Scholar, she is an internationally reknowned speaker. Her numerous children's books of poetry, narrative, folklore and nonfiction have received prestigious awards including the Christopher Award and Pura Belpré Award. In 2012 she received the Virginia Hamilton Award in recognition of her body of work for children. In 2014 the Mexican Government honored her with the prestigious OHTLI Award for her services to the Mexican communities in the United States. F. Isabel Campoy (isabelcampoy.com) is the author of numerous children's books in the areas of poetry, theatre, stories, biographies, and art. As a researcher, she has published extensively, bringing to the curriculum an awareness of the richness of the Hispanic culture. She is an educator specialized in the area of literacy and homeschool interaction, topics on which she lecturers nationally. Her many accolades include ALA Notables, the San Francisco Library Award, the Reading the World Award from the University of San Francisco, the NABE Ramón Santiago Award, the International Latino Children's Book Award, and nine Junior Library Guild selections. She is a member of the North American Academy of Spanish Language.     Maribel Suárez has been illustrating picture books since 1985, with more than sixty titles published in Mexico, Spain, and the United States.
"Young speakers of either language will appreciate the bouncing rhythms and nonsense fun."—Booklist

"A lovely compendium [with] clear, charming watercolor cartoon illustrations. . . . Just as much fun to read in English as in Spanish, . . . this is a perfect example of translation as an art form."—School Library Journal