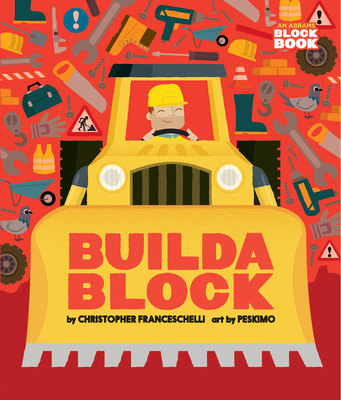 
On Our Shelves Now
In this companion to Alphablock, Countablock, Dinoblock, and Cityblock, readers are introduced to more than 24 construction machines. As in the previous books, Buildablock features die-cut shapes on every other spread and the charming art of British design team Peskimo. Alphablock was chosen one of Parents magazine’s 10 Best Children’s Books of 2013 and one of ALSC’s Notable Children’s Books of 2014.

Christopher Franceschelli is a seasoned publisher, editor, and creator of children’s books. He currently runs Chronicle’s Handprint imprint and the SmartInk packaging company. A born-and-raised New Yorker, Franceschelli lives with his family in Brooklyn. David Partington is an illustrator based in Bristol, UK. His influences range from mid-century design to Saturday morning cartoons. As part of Peski Studio (formerly Peskimo) he enjoys screen printing, a process which often informs his approach to illustration. David’s work can be seen in kids’ books, food packaging, and jumbo floor puzzles around the world. He especially enjoys creating characters, drawing friendly robots, and sending them on incredible adventures.
**STARRED REVIEW**
"Not only is its construction-site theme a passion for many children, its bold colors and thoughtful design will engage little hands and eyes as they pore over the pages. Sure to inspire calls of "READ IT AGAIN!"
— Kirkus Reviews

"Construction fans will happily add these rarities to their vocabularies as well as pick up strong action words like "burrow" and "span." Hand this upbeat treat to your budding builder."
— Shelf Awareness