Up for Air (Paperback) 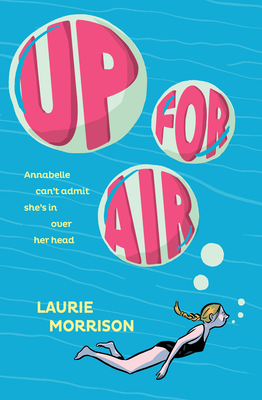 Up for Air (Paperback)


On Our Shelves Now
Dive into the paperback of this middle-grade novel about competitive swimming, changing friendships, and finding your place

Thirteen-year-old Annabelle struggles in school, no matter how hard she tries. But as soon as she dives into the pool, she’s unstoppable. She’s the fastest girl on the middle school swim team, and when she’s asked to join the high school team over the summer, everything changes. Suddenly, she’s got new friends, and a high school boy starts treating her like she’s somebody special—and Annabelle thinks she’ll finally stand out in a good way. She’ll do anything to fit in and help the team make it to the Labor Day Invitational, even if it means blowing off her old friends. But after a prank goes wrong, Annabelle is abandoned by the older boy and can’t swim. Who is she without the one thing she’s good at? Heartwarming and relatable, Up for Air is a story about where we find our self-worth.
Laurie Morrison taught middle school for ten years before writing Every Shiny Thing, her middle-grade debut with co-author Cordelia Jensen. She is also the author of Up for Air, and Saint Ivy. She received her MFA in writing for children and young adults from Vermont College of Fine Arts. She lives in Philadelphia.
**STARRED REVIEW**
"An awesome swimmer with a frustrating learning disability struggles in the roiling waters of adolescence . . . Readers will root for [Annabelle] as she ricochets between ebullience and despair, empathy and hurt, confidence and doubt, pride and self-loathing—we've been there, too, or soon will be. Captures the turmoil of adolescence with wisdom and humor in near-pointillist detail."
— Kirkus Reviews

**STARRED REVIEW**
"Morrison, a former teacher, realistically captures the challenges of middle school—complicated family dynamics, volatile friendships, and first love—in this story about a girl struggling to find where she belongs."
— Publishers Weekly

"Laurie Morrison authentically captures the lovelorn daydreams as well as the awkwardness and anxiety of a middle school girl with one foot in her childhood friendships and the other venturing into the world of young adulthood . . . the feelings and struggles Annabelle experiences are universal and will strike a chord with middle school students."
— School Library Connection

"Readers will relate to Annabelle—if not with the specifics of her life, then with the feelings of an almost teen as she navigates growing up. The well-crafted characters extend to the adults in the story, who are multilayered and have lives beyond their relationship with their daughter. Best of all, Annabelle's realizations about her life are hard won and wholly believable."
— Booklist