The Every Baby Book: Families of Every Name Share a Love That’s Just the Same (Board book) 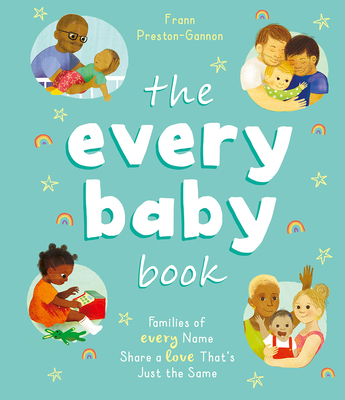 The Every Baby Book: Families of Every Name Share a Love That’s Just the Same (Board book)


On Our Shelves Now
This cute, inclusive board book celebrates the things that families of all kinds share—and the love at the heart of each one

Every baby’s day is different, but lots of first experiences are shared, too. The youngest reader will delight in recognizing their own daily routine unfold with every turn of the page, as we follow six families from breakfast until bedtime. Whether a child has two dads, two moms, or a single parent, this book forms a snapshot of daily life that 21st-century families of every kind will recognize and relate to.

Adorable artwork and read-aloud rhyming texts from bestselling author/illustrator Frann Preston-Gannon will allow babies and parents everywhere to share a giggle at bedtime.

Frann Preston-Gannon is a bestselling illustrator and designer whose work has been published around the world. In April 2011, she became the first UK recipient of the Sendak Fellowship and spent the autumn of that year living with and learning from the great master of illustration, Maurice Sendak, at his home in Connecticut. Her book Sing a Song of Seasons won starred reviews from Kirkus, Publishers Weekly, Shelf Awareness, and Wall Street Journal along with a host of awards.