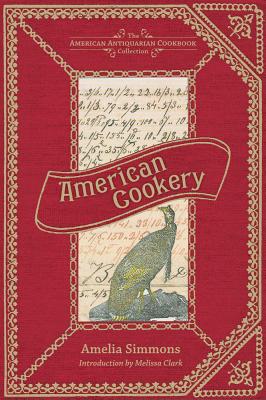 
Email info@literatibookstore.com or call for price
Published in Hartford in 1796, this volume in the American Antiquarian Cookbook Collection is a facsimile edition of one of the most important documents in American culinary history. This is the first cookbook written by an American author specifically published for American kitchens.

Named by the Library of Congress as one of the 88 "Books That Shaped America," American Cookery was the first cookbook by an American author published in the United States. Until its publication, cookbooks printed and used by American colonists were British. As indicated in Amelia Simmons’s subtitle, the recipes in her book were “adapted to this country,” reflecting the fact that American cooks had learned to make do with what was available in North America. This cookbook reveals the rich variety of food colonial Americans used, their tastes, cooking and eating habits, and even their rich, down-to-earth language.

Bringing together English cooking methods with truly American products, American Cookery contains the first known printed recipes substituting American maize for English oats; and the recipe for Johnny Cake is apparently the first printed version using cornmeal. The book also contains the first known recipe for turkey. Possibly the most far-reaching innovation was Simmons’s use of pearlash—a staple in colonial households as a leavening agent in dough, which eventually led to the development of modern baking powders.

“Thus, twenty years after the political upheaval of the American Revolution of 1776, a second revolution—a culinary revolution—occurred with the publication of a cookbook by an American for Americans.” (Jan Longone, curator of American Culinary History, University of Michigan)

This facsimile edition of Amelia Simmons's American Cookery was reproduced by permission from the volume in the collection of the American Antiquarian Society, Worcester, Massachusetts. Founded in 1812 by Isaiah Thomas, a Revolutionary War patriot and successful printer and publisher, the Society is a research library documenting the life of Americans from the colonial era through 1876. The Society collects, preserves, and makes available as complete a record as possible of the printed materials from the early American experience. The cookbook collection includes approximately 1,100 volumes.
There is no formal biography of Amelia Simmons available, except what is listed on the cover of her cookbook: “Amelia Simmons, an American orphan.” From the language of the book and its publishing history, culinary historians have deduced that she was most likely a domestic servant without formal education. (She describes enlisting a transcriber to write out the book for her.) Simmons probably came from the Hudson Valley region, and the basic content of the recipes indicates that she was a “good plain cook,” to substantiate the theory of her origins.