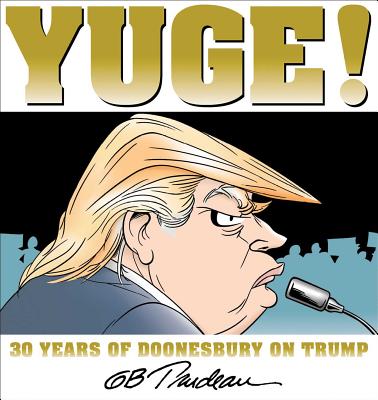 This is book number 37 in the Doonesbury series.

“Doonesbury is one of the most overrated strips out there. Mediocre at best.”
—Donald Trump, 1989

He tried to warn us. Ever since the release of the first Trump-for-President trial balloon in 1987, Doonesbury’s Garry Trudeau has tirelessly tracked and highlighted the unsavory career of the most unqualified candidate to ever aspire to the White House. It’s all there—the hilarious narcissism, the schoolyard bullying, the loathsome misogyny, the breathtaking ignorance; and a good portion of the Doonesbury cast has been tangled up in it.  Join Duke, Honey, Earl, J.J., Mike, Mark, Roland, Boopsie, B.D., Sal, Alice, Elmont, Sid, Zonker, Sam, Bernie, Rev. Sloan, and even the Red Rascal as they cross storylines with the big, orange airhorn who’s giving the GOP such fits.

"Trump and ‘Doonesbury’: The Comic Gift That Keeps On Giving"
(The New York Times)

"Why so surprised, America? Doonesbury has been preparing us for President Trump since 1987.” (USA Today)

"If anybody thinks Trump can do a presidential pivot and change his personality “Yuge!” should be required reading.”
(The Daily Kos)

"The first thing to know about Trudeau’s Trump strips is that they’re funny as hell…There have been many election-season caricatures of Trump, but Trudeau’s been doing this for 30 years. He’s practically the court artist of Castle Trump, and no one can beat him (not even Trump, whose capacity for self-parody can’t be overstated).”