Great Projects: The Epic Story of the Building of America, from th (Paperback) 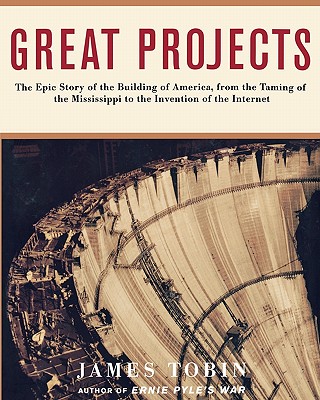 Great Projects: The Epic Story of the Building of America, from th (Paperback)


Usually Available in 2-5 Days
Since the earliest days of the republic, great engineering projects have shaped American landscapes and expressed American dreams. The ambition to build lies as close to the nation's heart as the belief in liberty. We live in a built civilization, connected one to another in an enormous web of technology. Yet we have all too often overlooked the role of engineers and builders in American history. With glorious photographs and epic narrative sweep, Great Projects at last gives their story the prominence it deserves.

Each of the eight projects featured in this masterful narrative was a milestone in its own right: the flood-control works of the lower Mississippi, Hoover Dam, Edison's lighting system, the spread of electricity across the nation, the great Croton Aqueduct, the bridges of New York City, Boston's revamped street system, known as the Big Dig, and the ever-evolving communica- tions network called the Internet. Each project arose from a heroic vision. Each encountered obstacles. Each reveals a tale of genius and perseverance.

James Tobin, winner of a National Book Critics Circle Award, explains the four essential tasks of the engineer: to protect people from the destructive force of water while harnessing it for the enormous good it can do; to provide people with electricity, the motive force of modern life; to make great cities habitable and vital; and to create the pathways that connect place to place and person to person. Tobin focuses on the indi- viduals behind our greatest structures of earth and concrete and steel: James Buchanan Eads, who walked on the floor of the Mississippi to learn the river's secrets; Arthur Powell Davis and Frank Crowe, who imagined a dam that could transform the West; Thomas Edison, who envisioned a new way to light the world; Samuel Insull, the organizational mastermind of the electrical revolution; the long-forgotten John Bloomfield Jervis, who assured New York's future with the gift of clean water; Othmar Ammann, the modest Swiss-American who fought his mentor to become the first engineer to bridge the lower Hudson River; Fred Salvucci, the antihighway rebel who transformed the face of Boston; and J.C.R. Licklider, the obscure scientist who first imagined the Internet. Here, too, are the workers who scorned hardship to turn the engineers' dreams into reality, deep underground and high in the sky, through cold and heat and danger. In Great Projects -- soon to be a major PBS television series by the Emmy Award-winning Great Projects Film Company -- we share their dreams and witness their struggles; we watch them create the modern world we walk through each day -- the "city upon a hill" that became our America.
James Tobin won the National Book Critics Circle Award in biography for Ernie Pyle’s War and the J. Anthony Lukas Work-in-Progress Award for To Conquer the Air: The Wright Brothers and the Great Race for Flight. Educated at the University of Michigan, where he earned a PhD in history, he teaches narrative nonfiction in the Department of Media, Journalism, and Film at Miami University in Oxford, OH.