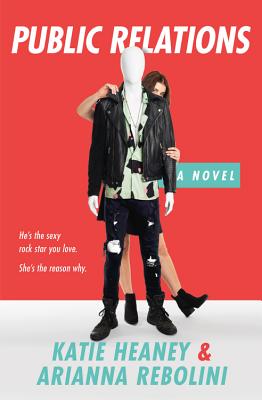 
Email info@literatibookstore.com or call for price
A smart and charming romantic comedy about a popstar and the publicist pulling his strings that Kirkus calls a "Cinderella for the modern age."

Young PR star Rose Reed is thrown into the big leagues when her boss leaves town the day of the firm's meeting with Archie Fox, a young, hot, internationally famous British singer-songwriter. The meeting is going badly until Rose suggests a staged romance with up-and-coming, young indie star Raya. He'll do it, but only if Rose becomes his publicist.

As the faux-mance between Archie and Raya begins to rehabilitate Archie's faltering career, Rose finds his herself having unexpected, inconvenient and definitely unprofessional feelings for the crooner. But do late night texts and impromptu burrito binges mean he feels the same? In the end, Rose will have to decide whether to let her fantasy crush go, or to risk her reputation to be with the charming, handsome, scoundrel-y but sweet pop star she's grown to love.

With a razor-sharp voice full of wry humor, Public Relations is a fun-filled glimpse behind the curtain of the PR machines that create our favorite celebrities.
Arianna Rebolini is a writer and editor whose work has been published in the Guardian, the Hairpin, and at BuzzFeed. She lives in Brooklyn.

Katie Heaney is a senior editor at BuzzFeed whose writing has appeared in Cosmopolitan, Vulture, The Hairpin, The Awl, and Pacific Standard, among other places. She is the author of a memoir, Never Have I Ever, and the novel Dear Emma. She lives in Brooklyn.
Public Relations incisively captures the both hectic and structured world of celebrity PR. As devoted tabloid readers, self-imposed media critics and rom-com addicts, we eagerly devoured the scandalous relationship between bright-eyed Rose Reed and her charge, the not-so-unfamiliar Archie Fox (OK: rhymes with "Barry Miles"). If you keep tabs on celebs via Instagram and regularly refresh Oh No They Didn't!, you'll love Heaney and Rebolini's spin on an age-old tale of girl-meets-pop-star.
—Lindsey Weber and Bobby Finger, co-hosts of the Who? Weekly podcast

Public Relations is a fun, relatable fantasy for anyone whose ever crushed on their favorite rock star. The authors
treat music fandom with respect and give everyone just enough of what they want in the end.—Adam J. Kurtz, author of 1 Page and Pick Me Up

Written with wit and charm, the novel is a fun and quick read... Heaney
and Rebolini have crafted "Cinderella" for the modern age.—Kirkus

Romantic, heartwarming, and hilarious. The perfect summer read for anyone who's ever fantasized about falling in love with a pop star. Katie Heaney and Arianna Rebolini make me wish real life celebrities were as fun to read about as Archie Fox.
—Dana Schwartz, creator of @GuyInYourMFA and author of And We're Off

A fun, fast-paced, feminist page-turner, Public Relations is an addictive read that goes perfectly with a glass of white.—Buzzfeed

The coauthors create a cast of characters and story with which readers will fall in love...an outstanding read.—Library Journal