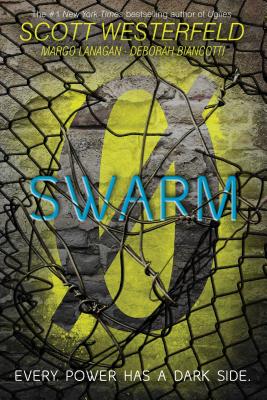 This is book number 2 in the Zeroes series.

They thought they’d already faced their toughest fight. But there’s no relaxing for the reunited Zeroes.

These six teens with unique abilities have taken on bank robbers, drug dealers, and mobsters. Now they’re trying to lay low so they can get their new illegal nightclub off the ground.

But the quiet doesn’t last long when two strangers come to town, bringing with them a whole different kind of crowd-based chaos. And hot on their tails is a crowd-power even more dangerous and sinister.

Up against these new enemies, every Zero is under threat. Mob is crippled by the killing-crowd buzz—is she really evil at her core? Flicker is forced to watch the worst things a crowd can do. Crash’s conscience—and her heart—get a workout. Anon and Scam must both put family loyalties on the line for the sake of survival. And Bellwether’s glorious-leader mojo deserts him.

\Who’s left to lead the Zeroes into battle against a new, murderous army?
Scott Westerfeld is the author of the Leviathan series, the first book of which was the winner of the 2010 Locus Award for Best Young Adult Fiction. His other novels include the New York Times bestseller Afterworlds, the worldwide bestselling Uglies series, The Last Days, Peeps, So Yesterday, and the Midnighters trilogy. Visit him at ScottWesterfeld.com or follow him on Twitter at @ScottWesterfeld.

Margo Lanagan has been publishing stories for children, young adults and adult readers for twenty-five years. She has won numerous awards, including four World Fantasy Awards. Two of her books have been Michael L. Printz Honor books and she has been shortlisted for the Hugo and Nebula awards and for the Los Angeles Times Book Prize in the young adult division. Visit Margo at her blog, AmongAmidWhile.Blogspot.com, or follow her on Twitter at @MargoLanagan.

Deborah Biancotti has written two short story collections, Bad Power and A Book of Endings. She’s been nominated for the Shirley Jackson Award and the William L. Crawford Award for Best First Fantasy Book. You can find her online at DeborahBiancotti.com or on Twitter at @Deborah_B.