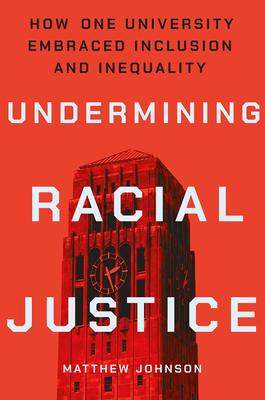 Over the last sixty years, administrators on US college campuses have responded to black campus activists by making racial inclusion and inequality compatible. Johnson's book is an examination of ongoing entrenched inequality at elite universities, with the University of Michigan experiment at its center.

Over the last sixty years, administrators on college campuses nationwide have responded to black campus activists by making racial inclusion and inequality compatible.

This bold argument is at the center of Matthew Johnson's powerful and controversial book. Focusing on the University of Michigan, often a key talking point in national debates about racial justice thanks to the contentious Gratz v. Bollinger 2003 Supreme Court case, Johnson argues that UM leaders incorporated black student dissent selectively into the institution's policies, practices, and values. This strategy was used to prevent activism from disrupting the institutional priorities that campus leaders deemed more important than racial justice. Despite knowing that racial disparities would likely continue, Johnson demonstrates that these administrators improbably saw themselves as champions of racial equity.

What Johnson contends in Undermining Racial Justice is not that good intentions resulted in unforeseen negative consequences, but that the people who created and maintained racial inequities at premier institutions of higher education across the United States firmly believed they had good intentions in spite of all the evidence to the contrary. The case of the University of Michigan fits into a broader pattern at elite colleges and universities and is a cautionary tale for all in higher education. As Matthew Johnson illustrates, inclusion has always been a secondary priority, and, as a result, the policies of the late 1970s and 1980s ushered in a new and enduring era of racial retrenchment on campuses nationwide.