LEWSER!: More Doonesbury in the Time of Trump (Paperback) 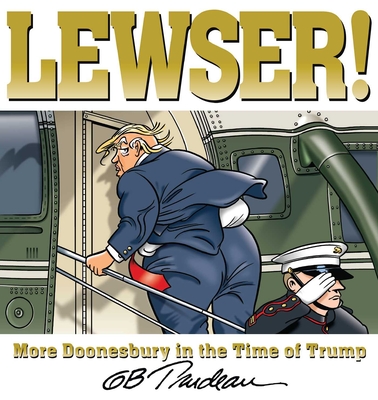 LEWSER!: More Doonesbury in the Time of Trump (Paperback)

A mirthful and merciless skewering of the Trump administration from the senior statesman of political cartooning, Garry Trudeau.

From the Pulitzer Prize-winning cartoonist whose acclaimed Yuge!: 30 Years of Doonesbury on Trump blew up the bestseller list, G.B. Trudeau's final installment of his Doonesbury Trump trilogy takes readers through the dark heart of Trump's presidency and into 2020 election mania. Including two years' worth of original Doonesbury Sundays, full-color spreads, and 18 previously unpublished strips, the presciently-titled Lewser buttons up our most recent long national nightmare just in time for Christmas.

G. B. Trudeau has been drawing his Pulitzer Prize-winning comic strip for more than forty years. In addition to cartooning, Trudeau has worked in theater, film, and television. He also has been a contributing columnist for the New York Times op-ed page and later an essayist for Time magazine. He is a fellow of the American Academy of Arts & Sciences. He lives in New York City with his wife, Jane Pauley. They have three grown children.