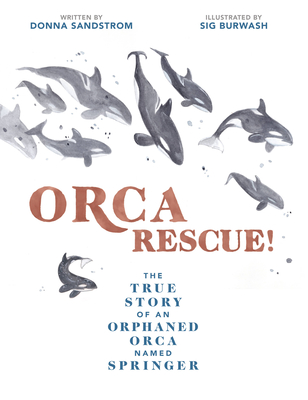 
Usually Available in 2-5 Days
A captivating account of the only successful orca rescue and reunion in history told in first person by Donna Sandstrom, a citizen participant of the rescue.

In 2002, a young orca was spotted alone in Puget Sound near Seattle --- lost, underweight and 300 miles away from her home waters in Canada. Donna Sandstrom, an orca enthusiast in Seattle, eagerly joined the volunteer effort to help. Here she tells the riveting story, from identifying the orca as a missing calf named Springer; through making the decision to try to transport her home; to planning and organizing the trip; to, finally, releasing her near Vancouver Island, where Springer was reunited with her family. It's an incredible story of the only successful orca rescue and reunion ever, and readers will be captivated as the epic rescue unfolds!

Donna Sandstrom's fascinating up-close-and-personal depiction of the rescue mission, with new behind-the-scenes details, uses an innovative mix of narrative storytelling interspersed with spreads of factual information about orcas and the history of their relationship with humans. Sarah Burwash's evocative watercolor illustrations make the perfect accompaniment to the text. Orcas and their survival are a topical issue, and readers will discover what it's like on the front lines of whale rescue, including the collaboration and teamwork that are required. There are numerous curriculum links to life science here, particularly animals and habitats, as well as to social studies in the descriptions of the connections and cooperation between Canada and the United States. The book includes a map showing Springer's trip, tips for how to help whales and dolphins, resources and a glossary.
Donna Sandstrom became interested in orcas when she moved to Seattle and started dreaming about them. In 2002, she was a community organizer in the effort to return Springer, an orphaned orca, to her pod. The life-changing experience inspired her to start The Whale Trail, a series of sites where people can watch whales from shore. She lives in Seattle, Washington.
Sarah Burwash is a visual artist working in a variety of media including watercolor, collage, ceramics, animation, illustration and comics. Her work is both imaginative and rooted in her lived experiences, including cabin building, forest stewarding, motorcycling and crewing on a fishing vessel. Her work has been exhibited in Canada, the United States and Europe. Originally from kEluwi'sst (Rossland), British Columbia, she now lives and works in Unama'ki (Cape Breton Island), Nova Scotia.
Whale Trail founder Donna Sandstrom has scripted a well-researched, feel-happy story for all ages --- a story for the ages. Her involvement in Springer's rescue makes it personal and resonant. Discover how a charismatic young orca and engaged scientists can inspire brave management decisions and get humans to work together. The wild orca families take care of the rest. Inspiring.—Erich Hoyt, author of Orca: The Whale Called Killer

This wonderful book is a delight to read and very informative.—School Library Connection

... an inspiring story with memorable lessons about overcoming adversity, the power of teamwork, and the enduring strength of family ties.—Hakai Magazine

It's perfect for recreational reading, rereading, sharing and for stimulating discussion about our relationship with the natural world and the need for human intervention in critical conservation situations.—CM Magazine