Before We Stood Tall: From Small Seed to Mighty Tree (Hardcover) 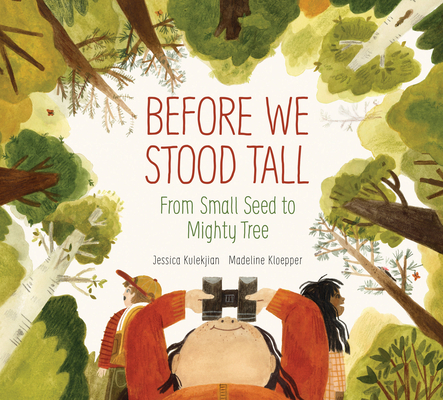 Before We Stood Tall: From Small Seed to Mighty Tree (Hardcover)


On Our Shelves Now
Expressive text and art tell the story of the life cycle of trees as it has never been told before --- in reverse.

Here's a lyrical depiction of the life cycle of trees, told one step at a time, based on newly researched information. The steps are described in simple but evocative text, each starting with “Before . . .” for a rhythmic telling. For example, “Before we stood tall, we clothed ourselves in bark and crowned ourselves in leaves, waving eagerly at the sun.” Particular attention is paid throughout to what's happening underground and how that links all life in the forest. Beginning with mature giants, “mighty in the kingdom of trees,” and ending with the promise of new life on the branches that are “hoping to be mighty in the kingdom of trees,” it's a beautiful and loving celebration of the circle of life.

Jessica Kulekjian's skill at seamlessly blending nonfiction information with a poetic narrative sets this informational picture book apart. She also uniquely incorporates intriguing new research on how trees communicate with each other using an underground network of roots and fungus that connects the forest and helps the trees to thrive. Madeline Kloepper's rich artwork with its deep earth tone palette brings the forest and all its inhabitants alive on the page. The material has been vetted by several scientists, including experts on trees, insects and mushrooms. Supported by well-researched backmatter, the book has strong curriculum links to early elementary earth and life science topics, including plants, ecosystems and soil.
Before Jessica Kulekjian was a teacher and writer, she spent her childhood playing among trees and imagining stories. As she grew, her love of learning sprouted alongside a dream to become an author. Before We Stood Tall is her first book. Jessica lives in central California with her family.

Madeline Kloepper grew up in the lower mainland of British Columbia and has a BFA from Emily Carr University of Art and Design. Her work is influenced by childhood, nostalgia and the relationships we forge with nature. She has illustrated several books for children and lives in Prince George, British Columbia.
Relax and enjoy.—Kirkus Reviews

Readers who have an interest in environmental science or who just love trees and forests will find this book enjoyable and informational at the same time.—School Library Connection

... a treasure. Its unique presentation will appeal to those who are already nature lovers and may spark that magic moment when a not-yet nature lover looks up with wonder.—CM Magazine