We Are the Wildcats (Paperback) 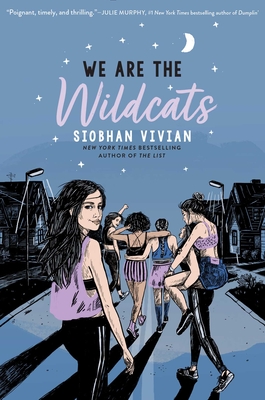 We Are the Wildcats (Paperback)


Usually Available in 2-5 Days
A toxic coach finds himself outplayed by the high school girls on his team in this deeply suspenseful novel, which unspools over twenty-four hours through six diverse perspectives.

Tomorrow, the Wildcat varsity field hockey squad will play the first game of their new season. But at tonight’s team sleepover, the girls are all about forging the bonds of trust, loyalty, and friendship necessary to win.

Everything hinges on the midnight initiation ceremony—a beloved tradition and the only facet of being a Wildcat that the girls control. Until now.

Coach—a handsome former college player revered and feared in equal measure—changes the plan and spins his team on a new adventure. One where they take a rival team’s mascot for a joyride, crash a party in their pajamas, break into the high school for the perfect picture.

But as the girls slip out of their comfort zone, so do some long-held secrets. And just how far they’re willing to go for their team takes them all—especially Coach—by surprise.

A testament to the strength and resilience of modern teenage girls, We Are the Wildcats will have readers cheering.
Siobhan Vivian is the author of the young adult novel We Are the Wildcats, as well as Stay Sweet, The Last Boy and Girl in the World, The List, Not That Kind of Girl, Same Difference, A Little Friendly Advice, and the Burn for Burn trilogy, cowritten with Jenny Han. A former editor for Alloy Entertainment, she received her MFA in creative writing at the New School. She teaches creative writing at the University of Pittsburgh. Visit her at SiobhanVivian.com.
PRAISE FOR WE ARE THE WILDCATS

“Poignant, timely and thrilling, We Are the Wildcats is the perfect read for all of us who are ready to bite back.”
— Julie Murphy, #1 New York Times bestselling author of DUMPLIN'

“We are the Wildcats is a tour-de-force. By the novel’s end, I was devastated to leave these characters behind. This is a powerful story that will stay with you long after the last page is turned."
— Morgan Matson, author of the New York Times bestseller SAVE THE DATE

* "Courage is at the heart of Siobhan Vivian’s We Are the Wildcats. Creating different voices and backstories for this many primary characters isn’t easy, but Vivian does so with aplomb, giving each Wildcat a credible and memorable personality."
— BookPage, starred review

"A taut, triumphant collective portrait of girls learning to measure their own worth."
— Booklist, Online Exclusive