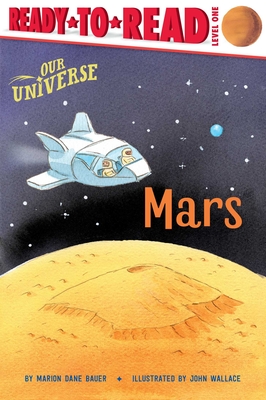 
On Our Shelves Now
Explore the planet Mars in the second book in this new, nonfiction Level 1 Ready-to-Read series about the universe that’s perfect for kids who love science and space!

Do you see that red dot in the night sky? It’s Mars! Discover the exciting surprises about the Red Planet in this cosmic, fact-filled Level 1 Ready-to-Read.
Marion Dane Bauer is the author of many books for young readers, including the Newbery Honor book On My Honor and the Coretta Scott King Book Illustrator Award winner The Stuff of Stars. She lives in St. Paul, Minnesota, and can be reached at MarionDaneBauer.com.

John Wallace’s formal training was not in illustration, but rather theology, which he received at Cambridge University. However, he always loved drawing, and one of his early jobs was as a newspaper cartoonist. In his children’s books illustrations, John is particularly inspired by what he calls “the gooniness” of young school children. John and his family divide their time between Brighton, England, and Long Island, New York.
"Engages [readers] with the kinds of facts that kids love: Mars is a planet that has two moons, blue sunsets, a canyon as wide as the entire United States, extreme dust storms, and ground that is potentially poisonous. . . . Colorful, playful ­llustrations and simple text make this a pleasing introduction to outer space."
— School Library Journal