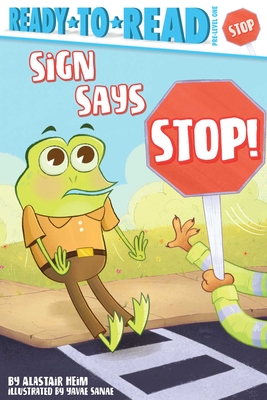 
Usually Available in 2-5 Days
Mr. Frog wants to cross the street, but the crosswalk sign says “​stop.”​ See how he flips, flops, and jumps his way to the other side in this funny Pre-Level 1 Ready-to-Read!

Mr. Frog finds out that timing is everything when he keeps missing his chance to cross the street as the crosswalk sign changes from “stop” to “go.” Can he stop daydreaming about how he will jump, hop, or flip his way across the street, and how much fun he will have when he gets to the other side, before the sign says “stop” again? Sometimes the journey is just as much fun as the destination!
Alastair Heim writes children’s picture books. He lives in Kansas City with his awesomely awesome family who inspire him every day. Laughter is his favorite sound, purple is his favorite color, and other-people-cooking-for-me is his favorite food. Alastair is a huge fan of music and has been known to play the guitar with impeccable mediocrity. After experiencing the joy, laughter, and wondrous awe picture books brought his kids (and still continue to), he thought that there would be nothing cooler than to see that same reaction come from one of Daddy’s stories. He hopes his books put a smile on other kids’ faces, too.

Yavae Sanae is an illustrator and designer specializing in character design, visual development, and color styling in TV animation. A Wisconsin native, Yavae grew up with blizzards, tornadoes, and cheese before moving to a small town in Georgia when she was eight years old. Her interests and cultural background are evident in her exploration of diverse locations, people, and things. She graduated from the Savannah College of Art and Design with a BFA in animation. She now spends her time creating silly characters and illustrations, dancing, and being a human butler for her kitten, Lazlo.