Gleanings: Stories from the Arc of a Scythe (Hardcover) 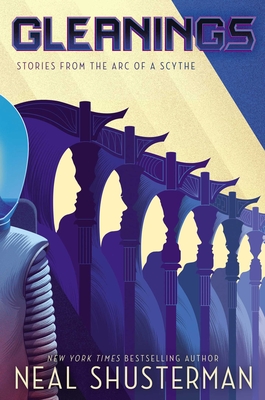 Gleanings: Stories from the Arc of a Scythe (Hardcover)

There are still countless tales of the Scythedom to tell. Centuries passed between the Thunderhead cradling humanity and Scythe Goddard trying to turn it upside down. For years, humans lived in a world without hunger, disease, or death with Scythes as the living instruments of population control.

Neal Shusterman—along with collaborators David Yoon, Jarrod Shusterman, Sofía Lapuente, Michael H. Payne, Michelle Knowlden, and Joelle Shusterman—returns to the world throughout the timeline of the Arc of a Scythe series. Discover secrets and histories of characters you’ve followed for three volumes and meet new heroes, new foes, and some figures in between.

Gleanings shows just how expansive, terrifying, and thrilling the world that began with the Printz Honor–winning Scythe truly is.
Neal Shusterman is the New York Times bestselling author of more than thirty award-winning books for children, teens, and adults, including the Unwind dystology, the Skinjacker trilogy, Downsiders, and Challenger Deep, which won the National Book Award. Scythe, the first book in his series Arc of a Scythe is a Michael L. Printz Honor Book. He also writes screenplays for motion pictures and television shows. Neal is the father of four, all of whom are talented writers and artists themselves. Visit Neal at StoryMan.com and Facebook.com/NealShusterman.
"Fans of the 'Arc of a Scythe' series will be pleased with this thrilling ­continuation."
— -School Library Journal

"Existing fans will relish the varied tales, which handle themes of art, meaning, and morality in a post-death world with an efficacious mixture of humor, violence, and gentle absurdity."
— -Publishers Weekly

"One for the legions of fans of this world."
— -Kirkus Reviews