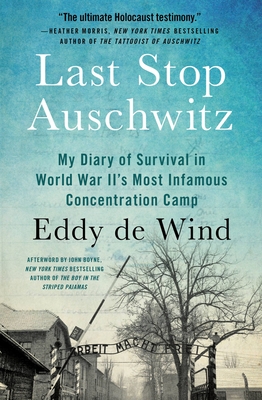 
On Our Shelves Now
Written in Auschwitz itself and translated for the first time ever into English, this one-of-a-kind, minute-by-minute true account is a crucial historical testament to a Holocaust survivor's fight for his life at the largest extermination camp in Nazi Germany.

"We know that there is only one ending to this, only one liberation from this barbed wire hell: death." -- Eddy de Wind
In 1943, amidst the start of German occupation, Eddy de Wind worked as a doctor at Westerbork, a Dutch transit camp. His mother had been taken to this camp by Nazis but Eddy was assured by the Jewish Council she would be freed in exchange for his labor. He later found out she'd already been transferred to Auschwitz.
While at Westerbork, he fell in love with a woman named Friedel and they married. One year later, they were transported to Auschwitz. Upon arrival, Friedel and Eddy were separated -- Eddy forced to work as a medical assistant in one barrack, Friedel at the mercy of Nazi experimentation in a nearby block. Sneaking moments with his beloved and communicating whenever they could, Eddy longed for the day he could be free with Friedel . . .
Written in the camp itself in the weeks following the Red Army's liberation of the camp, Last Stop Auschwitz is the raw, true account of Eddy's experiences at Auschwitz. In stunningly poetic prose, he provides unparalleled access to the horrors he faced in the concentration camp. Including photos from Eddy's life before, during, and after the Holocaust, this poignant memoir is at once a moving love story, a detailed portrayal of the atrocities of Auschwitz, and an intelligent consideration of the kind of behavior -- both good and evil -- people are capable of. Never before published in English, this book is a vital and enduring document: a testament to the strength of the human spirit, and a warning against the depths we can sink to when prejudice is given power.
Eddy de Wind was transported to Auschwitz in 1944, along with his wife. At the end of the war when the Nazis fled, Eddy hid and stayed behind, subsequently serving as a doctor in the Red Army treating other survivors. It was then that he wrote Last Stop Auschwitz: the only known book written within the grounds of Auschwitz itself. After the war, Eddy established himself as a renowned psychoanalyst in Amsterdam -- one of the first to write about a form of PTSD called "concentration camp syndrome". He is survived by his three children and second wife.

David Colmer is the award-winning translator of over 20 books. Among his accolades are the PEN Translation Prize, the 2009 Biennial NSW Premier Prize, the IMPAC Dublin Literary Award, and the David Reid Poetry Translation Prize.
"This unique contribution to the literature of the Holocaust will prove invaluable to all readers interested in recollections and histories of the period."
—Library Journal, starred review

"Still has considerable relevance...[Last Stop Auschwitz] almost gives the reader the impression of being a novel of fiction which, unfortunately, it is not."—New York Journal of Books