Notes from a Public Typewriter (Hardcover) 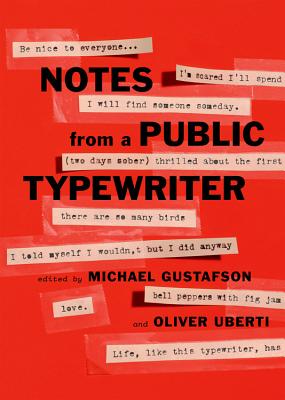 Notes from a Public Typewriter (Hardcover)

Over the years, thousands of anonymous Literati book browsers have left notes at our public typewriter. Here are our favorites--along with photos, stories, and musings about The World's Smallest Publishing House.

— From Mike's Picks
A collection of confessional, hilarious, heartbreaking notes written anonymously on a public typewriter for fans of PostSecret and Other People's Love Letters.

When Michael Gustafson and his wife Hilary opened Literati Bookstore in Ann Arbor, Michigan, they put out a typewriter for anyone to use. They had no idea what to expect. Would people ask metaphysical questions? Write mean things? Pour their souls onto the page? Yes, no, and did they ever.

Every day, people of all ages sit down at the public typewriter. Children perch atop grandparents' knees, both sets of hands hovering above the metal keys: I LOVE YOU. Others walk in alone on Friday nights and confess their hopes: I will find someone someday. And some leave funny asides for the next person who sits down: I dislike people, misanthropes, irony, and ellipses ... and lists too.

In Notes From the Public Typewriter Michael and designer Oliver Uberti have combined their favorite notes with essays and photos to create an ode to community and the written word that will surprise, delight, and inspire.

Michael Gustafson is the co-owner of Literati Bookstore, an independent bookstore in Ann Arbor, Michigan. He lives in Ann Arbor with his wife and Literati Bookstore co-owner, Hilary. Oliver Uberti is an award-winning graphic designer and was Senior Design Editor at National Geographic before turning to books. He is the co-author and designer of two books published by Penguin in the UK, London: The Information Capital (2014) and Where the Animals Go (2016). He lives in Los Angeles.