Antigone Rising: The Subversive Power of the Ancient Myths (Paperback) 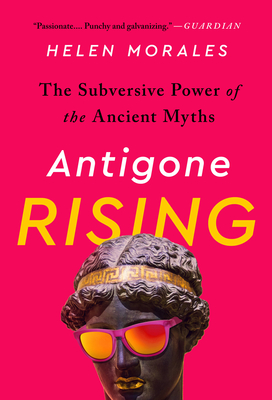 Antigone Rising: The Subversive Power of the Ancient Myths (Paperback)


On Our Shelves Now
A witty, inspiring reckoning with the ancient Greek and Roman myths and their legacy, from what they can illuminate about #MeToo to the radical imagery of Beyoncé.
The picture of classical antiquity most of us learned in school is framed in certain ways -- glossing over misogyny while omitting the seeds of feminist resistance. Many of today's harmful practices, like school dress codes, exploitation of the environment, and rape culture, have their roots in the ancient world.
But in Antigone Rising, classicist Helen Morales reminds us that the myths have subversive power because they are told -- and read -- in different ways. Through these stories, whether it's Antigone's courageous stand against tyranny or the indestructible Caeneus, who inspires trans and gender queer people today, Morales uncovers hidden truths about solidarity, empowerment, and catharsis.
Antigone Rising offers a fresh understanding of the stories we take for granted, showing how we can reclaim them to challenge the status quo, spark resistance, and rail against unjust regimes.
Helen Morales holds the Argyropoulos Chair in Hellenic Studies at the University of California, Santa Barbara. She is the author of Classical Mythology: A Very Short Introduction and Pilgrimage to Dollywood: A Country Music Road Trip Through Tennessee, which inspired an honors history course about Dolly Parton at the University of Tennessee-Knoxville. Morales has been a guest on BBC Radio 4 Women's Hour, and her work has been cited in the New York Times and The New Yorker. Morales taught previously at the University of Cambridge, where she was a Fellow of Newnham College, and has been a Fellow at the Center for Hellenic Studies in DC. She is on the editorial board of Eidolon, the popular online journal dedicated to antiquity and feminism. She lives with her family in Santa Barbara.
"Recommended for those who like their feminism well-researched, unapologetic, and unafraid of a dirty joke as well as to all who've struggled to see themselves reflected in history."—Booklist

"Engaging and well-researched, this book reveals how canonical narratives that appear to uphold (white) patriarchy can be reclaimed to benefit the very groups that patriarchy attempts to suppress. Concise, incisive, and provocative."— Kirkus Reviews

“A compelling story why the classics deserve a new look.”—The New York Journal of Books

"Wide-ranging and lively.... Morales sets out how antiquity is used to control and oppress, while also considering cases where it has been an inspiration in subverting oppressive or misleading narratives.... This book not only helps us to recognize and understand the role that ancient myth plays in our cultural hardwiring. It also shows us how antiquity can be used to do something about it.... In Antigone Rising, Helen Morales gets to work."
—Times Literary Supplement (UK)

"Faithful to its summons of Ralph Ellison in the preface, Helen Morales' Antigone Rising will enlarge you. Probing, learned, and heartfelt, this book advances a generous and inspiring vision of Greek myth for the 21st century. This is a book not just to read but to cherish, ideally with The Carters' Apeshitas sonic accompaniment."—Dan-el Padilla Peralta, Associate Professor of Classics, Princeton, and author of Undocumented: A Dominican Boy's Odyssey from a Homeless Shelter to the Ivy League

"From pussy hats to melting polar ice, Helen Morales finds unexpected ways to connect contemporary political uprisings with Greek and Roman mythology. While rooted in serious research, Antigone Rising is also revealing enough to make the mythology personal."—Mary Norris, author of Greek to Me: Adventures of the Comma Queen