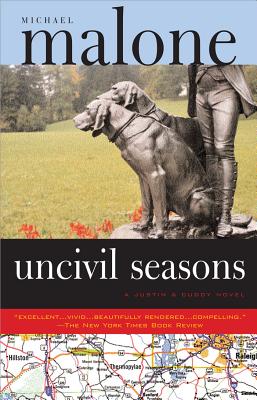 Wnen I read this novel some years ago, it instantly became one of my favorite books ever, and Malone one of my favorite writers. It is many things at once: an intricately plotted and suspenseful buddy-cop mystery; a romance with one of the most tender, realistic, and humorous renderings of two people falling in love I’ve ever come across; a thoughtful, literary novel that captures the feel of its small town Southern setting with beautiful prose and imagery, and its themes of class and race with honesty and nuance; and a playful screwball comedy of a book with its wacky humor and clever dialogue. Malone populates his town with colorful, complicated characters who breathe life and humor and conflict into the mix, and make this book smart and engaging. Reading this book was an absolutely exhilarating experience.

The polite Piedmont town of Hillston, North Carolina, wants to go on believing it is still too temperate to require homicide experts. But when the wife of a state senator is found beaten to death, the inner circle of Hillston's ruling families arranges to have the case assigned to Detective Justin Savile, the charming black sheep of the dynasty that founded the town.

Aided by his wise-cracking, working-class partner, Cuddy Magnum, and a young woman from the Carolina mountains whose strength and love rescues him from his own destructive impulses, Savile sets out to unravel the deceit hidden in Hillston's past. His obsessive pursuit of one of this own and his determination to save a petty thief from being railroaded for murder not only lead to other deaths, but bring the detective very near to losing his own life. With striking humor and a rich range of characters, Malone creates a landscape struggling the New South's high-tech lifestyles and the Old South's inherited codes.

Michael Malone is the literate and compassionate voice of the new American South. Critically acclaimed as one of the country's finest writers, his great gift for crafting remarkable and enduring comedies, as he did in Handling Sin, Dingley Falls and Foolscap, is matched only by his ability to deliver riveting suspense and mystery. Now, after a long absence, Michael Malone has returned to the scene of the crime. He has also come home to the South. He now lives in Hillsborough, North Carolina, with his wife, Maureen Quilligan, chair of the English department at Duke University.