The Artisanal Kitchen: Barbecue Sides: Perfect Slaws, Salads, and Snacks for Your Next Cookout (Hardcover) 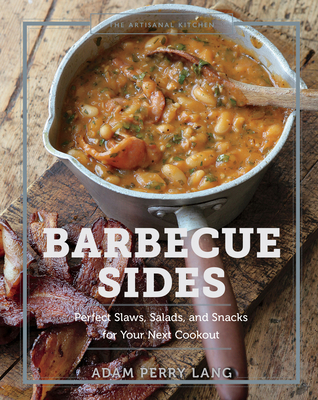 The Artisanal Kitchen: Barbecue Sides: Perfect Slaws, Salads, and Snacks for Your Next Cookout (Hardcover)

Move the meat from the center of the table and let these innovative side dishes steal the spotlight. Written by celebrated pitmaster Adam Perry Lang, Barbecue Sides includes a dozen-plus recipes for melting, creamy, and crispy dishes like Bubbling Bacon Butter Beans, Smoked-Corn Flan, and Scruffed Carbonara Potatoes that temper the strength of brawny barbecue mains without getting in the way of flavor. The menu is rounded out with a dozen additional recipes for fresh, sprightly, and green sides, like Mango Cilantro Salad and Green Apple, Cabbage, and Caraway Slaw, as well as pickled vegetables that add refreshing high notes and contrast to a plate. These first-rate side dishes will elevate your barbecue.
After Adam Perry Lang graduated with distinction from the Culinary Institute of America and worked his way through the kitchens of top‑rated French restaurants including Le Cirque and Daniel in New York City and Restaurant Guy Savoy in France, he left his pursuit of reviewers’ stars to open his first restaurant, Daisy May’s BBQ in New York City, and became a pioneer in urban barbecue. His first book, Serious Barbecue, was a New York Times bestseller. Lang lives and works in Los Angeles, where he is the chef/owner of APL, a contemporary steak house.

Peter Kaminsky is the author and coauthor of many books, including Pig Perfect, Culinary Intelligence, and Seven Fires and Mallmann on Fire (with Francis Mallmann). He is a longtime contributor to Food & Wine and a former columnist for the New York Times and New York magazine. He lives in Brooklyn, New York.