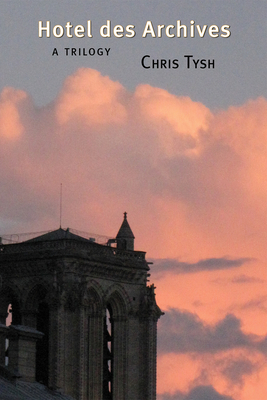 Hotel des Archives is a trilogy of books consisting of verse recastings from the French novels of Beckett, Genet and Duras. Synchronous with postmodernism's aesthetics of appropriation, détournement, sampling and other intertextual strategies, the project operates a double shift of genre and language, since she moves from the original French and from prose to lyric. These transcreations, as Tysh has been calling them, allow her to forsake the traditional mode of self-expression in favor of one that "translates" other cultural materials, creating an artistic network beyond boundaries and temporalities.

Chris Tysh was born and raised in Paris, and studied American literature at the Sorbonne. Her books include: Allen Ginsberg, a critical study,  was published in Paris by Editions Seghers in the series “Poètes d’Aujourd’hui”;  Our Lady of the Flowers, Echoic (Les Figues Press); Molloy: The Flip Side (BlazeVOX [books]); Night Scales: A Fable for Klara K (United Artists Books); Cleavage (Roof Books, 2004); Continuity Girl (United Artists Books, 2000); In the Name (Past Tents Press, 1994); and Coat of Arms. Her Motor City drama, car men, a play in d, was staged at the Detroit Institute of Arts under the direction of Carla Harryman in 1996. She is a 2003 National Endowment for the Arts fellow. She teaches writing and women’s studies at Wayne State University in Detroit.