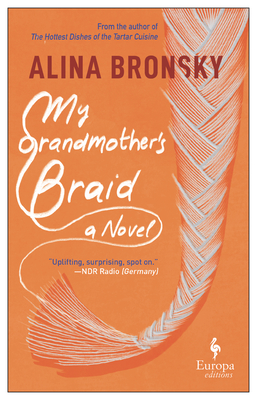 “Grandmother had a fear of heights. Once she stood up on a low stool and broke out in tears because she was so panic-stricken that she couldn’t get down. Grandfather hurried over to her and held out his hand, led her to a comfy chair, and held her hand until she calmed down. At that moment I realized he was with her voluntarily and that, unlike me, he could leave anytime.”

“Families are complicated” is quite the understatement when describing the family in this book. The narrator is a young boy whose grandmother thinks he’s a dolt. The grandmother is a former Russian ballerina who constantly fusses and insults everyone around her. The grandfather is in love with his neighbor. And the boy’s parents? You’ll have to read to find out.

Alina Bronsky knocks it out of the park with this one. MY GRANDMOTHER’S BRAID is darkly funny but so full of empathy and sensitivity. And I can’t get over how good the narration is. I’m very excited now to go back and read her previous book THE HOTTEST DISHES OF THE TARTAR CUISINE when I get a chance. I hope you love it too!

A MOST ANTICIPATED BOOK OF 2021

From the acclaimed author of The Hottest Dishes Of The Tartar Cuisine "a cruel comic romp ends as a surprisingly winning story of hardship and resilience" (The New Yorker).

Max lives with his grandparents in a residential home for refugees in Germany. When his grandmother--a terrifying, stubborn matriarch and a former Russian primadonna--moved them from the Motherland it was in search of a better life. But she is not at all pleased with how things are run in Germany: the doctors and teachers are incompetent, the food is toxic, and the Germans are generally untrustworthy.

His grandmother has been telling Max that he is an incompetent, clueless weakling since he was a child and she'd spend the day sitting in the back of his classroom to be sure he came to no harm. While he may be a dolt in his grandmother's eyes, Max is bright enough to notice that his stoic and taciturn grandfather has fallen hopelessly in love with their neighbor, Nina. When a child is born to Nina that is the spitting image of Max's grandfather, things come to a hilarious if dramatic head. Everybody will have to learn to defend themselves from Max's all-powerful grandmother.

Alina Bronsky writes of family dysfunction and machinations with a droll and biting humor, a tremendous ear for dialog, and a generous heart that is forgiving of human weakness. While Max's grandmother recalls the outrageously nasty Rosa from Bronsky's best-selling book, The Hottest Dishes of the Tartar Cuisine, this is a more tender and moving family portrait. Here the best-selling and internationally renowned author, while never abandoning her trademark and razor-sharp wit, tells a family story through a young boy's eyes. Max, over the course of the story, will appreciate that people's questionable behaviour may often be motivated by sadness.

"Irony, subtle humor, fascinating characters. A book that, after you finish it, you immediately want to start to read again."--Stuttgarter Zeitung

Alina Bronksy is the author of Broken Glass Park (Europa, 2010); The Hottest Dishes of the Tartar Cuisine (Europa, 2011), named a Best Book of 2011 by The Wall Street Journal, The Huffington Post, and Publishers Weekly; Just Call Me Superhero (Europa, 2014), and Baba Dunja's Last Love (Europa, 2016). Born in Yekaterinburg, an industrial town at the foot of the Ural Mountains in central Russia, Bronsky now lives in Berlin.