Those We Left Behind (The Belfast Novels #5) (Paperback) 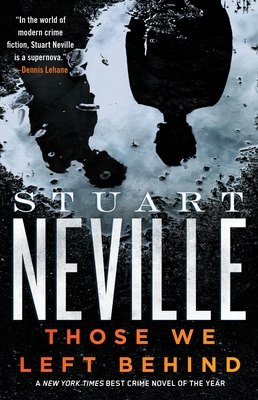 Those We Left Behind (The Belfast Novels #5) (Paperback)

This is book number 5 in the The Belfast Novels series.

Blood has always been thicker than water for two Northern Irish brothers caught in the Belfast foster system, but a debt of past violence will be paid by not just them, but also by those they left behind.

Ciaran Devine, who made Belfast headlines seven years ago as the “schoolboy killer,” is about to walk free. At the age of twelve, he confessed to the brutal murder of his foster father; his testimony mitigated the sentence of his older brother, Thomas, who was also found at the crime scene, covered in blood. But DCI Serena Flanagan, the only officer who could convince a young, frightened Ciaran to speak, has silently harbored doubts about his confession all this time.

Ciaran’s release means several things: a long-anticipated reunion with Thomas, who still wields a dangerous influence over his younger brother; the call-to-action of a man bent on revenge for his father’s death; and major trouble for Ciaran’s assigned probation officer. Meanwhile, Serena Flanagan has just returned to the force from her battle with breast cancer, only to endure the pitying looks of her coworkers and a mountain of open case files. She will soon discover that even closed cases can unleash terror on the streets of Belfast.
Stuart Neville, the “king of Belfast noir” (The Guardian), is the author of nine novels, for which he has won the  Los Angeles Times Book Prize and been shortlisted for the Edgar, Macavity, Dilys, Barry, and Anthony Awards as well as the CWA Steel Dagger. He lives near Belfast.
Praise for Those We Left Behind

"Neville's books are dark but elegantly written case studies of the roots of violence, and here he writes thoughtfully, about children who come from the streets, go through the foster programs and prison systems, and are either reborn or dragged back into the sorrows that are their inheritance."
—The New York Times Book Review

"Those We Left Behind is a great, brawling ache of a novel. Filled with both prickling suspense and fiercely wrought emotion, it’s a tale of the burdens of family and the weight of the past. And at its center, holding it all together, is DCI Serena Flanagan, the bruised and compassionate hero for whom we’ve all been waiting."
—Megan Abbott, author of The Fever

“In the world of modern crime fiction, Stuart Neville is a supernova. I buy his books the day they’re released because I can’t wait to see where he takes me next. And I’m never disappointed.”
—Dennis Lehane

"How good does crime writing get? Read this latest from Stuart Neville. DCI Serena Flanagan is back. The setting is Belfast, the writing is superb, the characters unforgettable and the plot as slick as the latest headline."
—The Globe and Mail

"Stuart Neville has been masterfully capturing the mean streets of Belfast in a series of thrillers, each arguably more powerful than the last. His latest, Those We Left Behind, in which he ups his game by about 10 notches, is a robust police procedural that also impressively plumbs his varied characters’ psychological vulnerabilities."
—The Boston Globe

"In Stuart Neville’s Belfast, the police are not icons of virtue, just less flawed than the criminals they are trying to help. Neville creates a sense of menace that jumps off the page, but with an underlying poetry that keeps you hoping innocence will prevail."
—Salem Macknee, Raleigh News & Observer

"The dread in this novel is palpable from the first pages until the heartbreaking final ones. It's Neville's best yet."
—Carol Barrowman, The Milwaukee Journal Sentinel

"Neville brings to the table his trademark powers of characterization and storytelling, sharply honed, in this tale of consequence and revenge."
—Bookreporter.com

"[A] searing, deeply affecting psychological thriller . . . Neville demonstrates once again that he’s a literary force to be reckoned with."
—Publishers Weekly, Starred Review

"Neville has the gift of making us care about the fate of each of his creations, whether they are convicted killers, cops, or innocent bystanders. Another winner, this is fast-paced and intriguing to the very end."
—Library Journal, Starred Review

"If crime connoisseurs take only one book to the beach this summer they should make sure it is Those We Left Behind by Stuart Neville, in which the absolute master of Belfast Noir delivers a sustained crescendo of creeping menace."
—Irish Independent

"His best novel since his debut, [The Ghosts of Belfast] . . . Flanagan is a compelling character, professionally capable and hard nosed but emotionally vulnerable in her private life, although it’s young Ciaran Devine who is the most haunting character."
—Declan Burke, The Irish Times

"[A] gripping tale of two brothers and one policewoman in Northern Ireland fighting to come to terms with peacefully living in a land still torn by the divisions of religious intolerance, and the deep scars it has left on its people."
—Herald Scotland, Pick of the Week

"A grim tale of dependence and obsession."
—Kirkus Reviews

"Deeply chilling but full of tenderness, this multi-stranded story is utterly compelling. The best book yet from a hugely talented writer."
—Sunday Mirror

"Stuart Neville is one of the most distinctive of the new crime writers from Ireland and Northern Ireland."
—The Life Sentence

"Chilling . . . Stays in the upper levels of intensity that drive the best of its genre."
—The Longest Chapter

Praise for the Belfast Thrillers

“Neville’s novel is a coldly lucid assessment of the fragility of the Irish peace . . . A rare example of legitimate noir fiction.”
—The New York Times Book Review

“Not only one of the finest thriller debuts of the last ten years, but also one of the best Irish novels, in any genre, of recent times.”
—John Connolly, New York Times bestselling author of The Wolf in Winter

“Never forgets the human heart that beats inside the bleakest darkness.”
—Val McDermid, author of The Skeleton Road

“Stuart Neville has a lock on dread . . . Full-bodied and credible.”
—Pittsburgh Post-Gazette