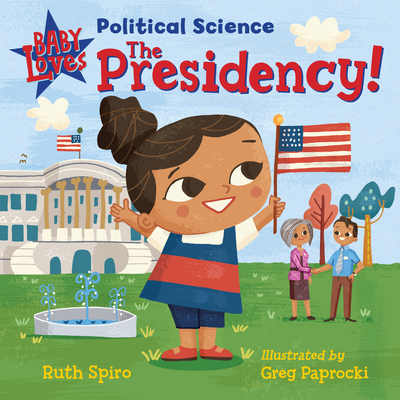 
On Our Shelves Now
A new addition to the beloved and bestselling Baby Loves Political Science series! This cute and clever introduction to political science and the US government is accurate and simple enough for baby.

A fun and easy introduction for baby to the three branches of the US government and the executive branch in particular. The president signs laws into effect, but it takes an entire cabinet and group of people to carry out the laws!
Ruth Spiro is the author of the best-selling Baby Loves Science series, which has been praised for introducing "big science to little minds with the skill of a neurosurgeon" (Matthew Winner, All the Wonders podcast). Ruth also wrote the picture book Made by Maxine. She speaks regularly at STEM and early-childhood conferences across the country.

Greg Paprocki is a graphic artist and children's book illustrator. His books include the top-selling BabyLit alphabet book series. www.gregpaprocki.com