Master of His Fate: Roosevelt's Rise from Polio to the Presidency (Hardcover) 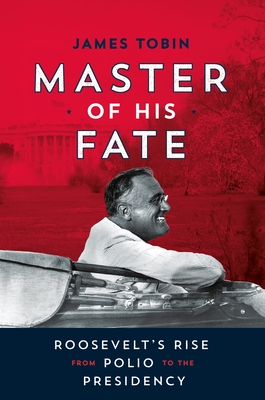 Master of His Fate: Roosevelt's Rise from Polio to the Presidency (Hardcover)

Master of His Fate by James Tobin is an inspiring middle-grade biography of Franklin Delano Roosevelt, with a focus on his battle with polio and how his disease set him on the course to become president.

In 1921, FDR contracted polio. Just as he began to set his sights on the New York governorship—and, with great hope, the presidency—FDR became paralyzed from the waist down. FDR faced a radical choice: give up politics or reenter the arena with a disability, something never seen before. With the help of Eleanor and close friends, Roosevelt made valiant strides toward rehabilitation and became even more focused on becoming president, proving that misfortune sometimes turns out to be a portal to unexpected opportunities and rewards—even to greatness.

James Tobin is an award-winning biographer and the author of The Very Inappropriate Word and Sue MacDonald Had a Book. He won the National Book Critics Circle Award in biography for Ernie Pyle’s War and the J. Anthony Lukas Work-in-Progress Award for To Conquer the Air: The Wright Brothers and the Great Race for Flight. He teaches narrative nonfiction in the Department of Media, Journalism, and Film at Miami University in Oxford, OH.

"A nuanced, engaging, and thought-provoking blend of biography and disability history." —Kirkus

"A tightly focused biography." —Bulletin of the Center for Children's Books