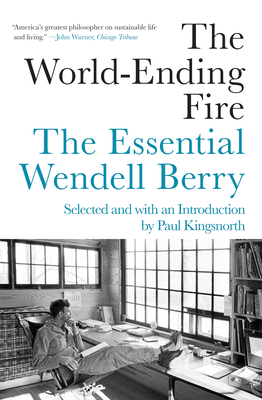 
On Our Shelves Now
The most comprehensive―and only author-authorized―Wendell Berry reader, "America's greatest philosopher on sustainable life and living" (Chicago Tribune).

In a time when our relationship to the natural world is ruled by the violence and greed of unbridled consumerism, Wendell Berry speaks out in these prescient essays, drawn from his fifty-year campaign on behalf of American lands and communities.

The writings gathered in The World-Ending Fire are the unique product of a life spent farming the fields of rural Kentucky with mules and horses, and of the rich, intimate knowledge of the land cultivated by this work. These are essays written in defiance of the false call to progress and in defense of local landscapes, essays that celebrate our cultural heritage, our history, and our home.

With grace and conviction, Wendell Berry shows that we simply cannot afford to succumb to the mass-produced madness that drives our global economy―the natural world will not allow it.

Yet he also shares with us a vision of consolation and of hope. We may be locked in an uneven struggle, but we can and must begin to treat our land, our neighbors, and ourselves with respect and care. As Berry urges, we must abandon arrogance and stand in awe.
Wendell Berry is the author of fifty books of poetry, fiction, and essays. He was recently awarded the Cleanth Brooks Medal for Lifetime Achievement by the Fellowship of Southern Writers and the Louis Bromfield Society Award. For over forty years he has lived and farmed with his wife, Tanya, in Kentucky.
New & Noteworthy, The New York Times Book Review
A Kirkus Reviews Best Book of the Year
One of Spirituality & Practice's Best Spiritual Books of the Year

"If these essays were required reading, I think our society would be in a lot better shape." ―Nick Offerman, Entertainment Weekly

"Here is a human being speaking with calm and sanity out of the wilderness. We would do well to hear him." ―The Washington Post Book World

"A fascinating tribute to the life of the land . . . Berry's writings are timelier than ever." ―Laura Garmeson, Financial Times

"Berry reminds us that to take small solutions off the table is also a kind of giving up. Some conservationists believe that because ecological problems are structural, there is no point in growing and cooking your own food, in setting down roots in a community, in being kind to your neighbors . . . You may as well drive as much as you want, waste paper towels, and buy meat from corporations that keep pigs in excrement-coated cages. Berry reminds us that to live this way is to forfeit our souls. It is important―no matter what is going on at a macro level―to be kind to your family, your neighbors and the land." ―The New Republic

"Compelling, luminous . . . our modern-day Thoreau. He is unlike anybody else writing today. He writes at least as well as George Orwell and has an urgent message for modern industrial capitalism . . . nobody can risk ignoring him." ―Andrew Marr, New Statesman

"This collection sees the American published on these islands for the first time, and now he has finally stepped ashore, it's worth getting to know him . . . Berry overturns plenty of thoughtful topsoil on environmental issues with a precise pen, and clears any thicket of cosy consensus with a clear eye and cutting hand." ―Irish Times

"It’s no great observation to note that we live in an incredibly polarized time, but, curiously, Berry doesn’t fit neatly into the conservative or liberal camp. There is just enough in his writing to both satisfy and provoke those of all ideological allegiances. Thanks to the Library of America’s efforts to reissue his writings beginning with the first half of his Port William novels and stories as well as his long-time publisher Counterpoint releasing The World-Ending Fire: The Essential Wendell Berry, a collection of his non-fiction edited by the aforementioned Kingsnorth, it’s never been easier to find a place to start . . . In these times we could all use his patient instruction." ―Psychology Today

"The World-Ending Fire: The Essential Wendell Berry is a selection of 31 essays spanning five decades of his works, and it could not have come at a better time as our nation thrashes about in search of a voice of reason. Who better than Berry to explain to us 'who we are, where we are, and what we must do to live'? . . . [It] ought to be required reading in every classroom . . . Wendell Berry is our National Guardian Angel!" ―The Christian Science Monitor

"[Berry] speaks out powerfully and poignantly on behalf of family farmers, their land, and their small towns. His spiritual vision of life is informed by a deep love of nature, a profound regard for the details of place, a respect for small-scale economies, and an advocacy of wise stewardship of the earth. Paul Kingsnorth chose the 31 essays for this handsome collection as ample evidence of Berry's inspiring defense of character qualities like rugged individualism, diligence, loyalty, and reverence for nature." ―Spirituality & Practice

"Whether you’re new to the words of Wendell Berry or a longtime fan of this Kentucky poet, farmer, and land-protector, you’ll want to add this tome of unforgettable, earth-moving Southern outdoors writing to the shelf." ―Garden & Gun

"These works are mostly about small-town America, and mostly set on Berry’s farm at Lane’s Landing, once a riverboat stop on the Kentucky River near Port Royal, Kentucky. But not one word stoops to smug nostalgia. He is instead trying to prove that science and economics happen in a place: he draws endlessly and non-repetitively on the deep well of the lived truth of farm life, which delivers up sweet, clear lines of poetry and local lore and a kind of immediate authenticity . . . In writing about the fate of the natural world, Berry is a prophet of the domestic. These essays are about how to make a household here on Earth. That project is made of the 'unrelentingly practical' things that can be done and that give us hope. Feel the dirt under your feet. You have the power." ―Los Angeles Review of Books

"A pleasing selection of essays from the lifelong farmer and award-winning writer . . . A great place to start for those who are not familiar with Berry's work; for those who are, it will be a nostalgic stroll down a rural, wooded Memory Lane. In this day and age, his writings are must-reads." ―Kirkus Reviews (starred review)

"Wendell Berry’s admirers―a loyal band several generations deep―may blink at the subtitle of this selection of his essays. 'Essential? What’s not essential?' To read or reread these pieces is, however, to warmly affirm editor Kingsnorth. Berry is the philosopher and the prophet of agriculture, community, stability, and friendship, and there is nothing sentimental or utopian anywhere in his advocacy of those things." ―Booklist (starred review)

"Berry’s graceful essays have long been models of eloquence, insight, and conviction . . . Newcomers will find the works exceptionally timely, and the book as a whole a thoughtful introduction to Berry’s writing." ―Publishers Weekly